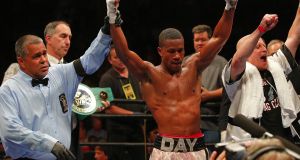 Halfway through the 10th and final round of a junior middleweight fight he had dominated, Charles Conwell rocked Patrick Day with a percussive right that sent him staggering in an arc around the ring. Conwell quickly unfurled the same punch again, following up with a vicious left hook, and, when Day finally crumpled, his head bounced almost theatrically off the canvas. “And there he goes,” announced the commentator, “down again and this time for good.” The victor danced around a bit then clambered up onto the ropes in the celebration stance. His opponent never regained consciousness and died in a Chicago hospital four days later.

The third professional boxer to be killed in the ring since July, Day’s death on October 16th prompted the obligatory hand-wringing about the brutality of the sport and inevitable calls for enhanced regulations to improve safety. Aside from banning it altogether, it’s difficult to see how any rules might have saved the 27-year-old’s life. Although behind on every card, there was no point in the contest when he appeared out of his depth, no dramatic weight cut that may have caused dehydration. Up until the end, it was merely one more bout where a younger, more fancied fighter demonstrated exactly why he was rated a superior prospect, albeit now one with demons of his own to contend with.

“I never meant for this to happen to you,” wrote Conwell on Instagram. “All I ever wanted to do was win. If I could take it all back I would – no one deserves for this to happen to them. I replay the fight over and over in my head thinking what if this never happened and why did it happen to you….I thought about quitting boxing but I know that’s not what you would want.”

At a press conference two days before the fight, Day gave the type of performance that made him one of the most popular figures in the game. In an age when trash-talking sells and tasteless bravado too often comes as standard in young fighters, he was modest about his place in the sport, grateful for the opportunity being afforded him on a nationally televised broadcast, and endearingly earnest in his delivery. After paying tribute to Chicago on his first time visiting the city, he spoke eloquently about Conwell’s impressive pedigree and wished all the other competitors on the card the very best.

“Pat Day makes any room he is in a better place,” said Lou DiBella, his promoter. “I’ve never met anyone who’s met Patrick and not liked him. Never heard him utter a mean word. Never saw him greet someone without a big smile.”

Or, as former fighter turned loquacious pundit Paulie Malignaggi put it on social media, “In a business of shitheads and frauds, you were always genuine, honest and real. Both in and out of the ring.”

Boxing has traditionally been the sport of redemption songs, time-worn arias about troubled young men saved from the mean streets by the lure of the speed ball, the cathartic draw of the heavy bag, and the folksy wisdom of a wizened old trainer. Day’s story never fit that narrative. The youngest of four sons to Haitian immigrants on Long Island, his mother is a translator at the United Nations and his father a doctor. Far from a hard-up kid trying to beat a lucrative path out of the ghetto, this was just a middle-class boy who fell in love with the sport in the most unlikely way.

At 14, he walked across the street from his family home in Freeport and into the garage of Joe Higgins where he’d seen neighbourhood kids pummeling a heavy bag. There, he discovered the peculiar thrill of a well-delivered punch. A retired firefighter, Higgins was battling serious health issues and dealing with PTSD since the September morning five years earlier that he’d run into the World Trade Center. He got out alive but his brother Timothy didn’t and he spent months thereafter sifting through the smoking rubble searching for his remains. The teenager wandered into his orbit just when he needed the distraction most.

‘Pat saved my life,” said Higgins, during the vigil family and friends kept by his hospital bedside.

Once Higgins persuaded the reluctant Mrs Day her son had a talent he should explore, the pair navigated their way to Golden Gloves titles in New York, a couple of national championships, and then into the more treacherous foothills of the professional ranks. All the while, Day continued his studies and graduated college with a degree in nutrition and wellness. Education was the back-up plan, the dream was always glory.

Even after a couple of losses in 2015 stalled his career, he regained momentum. Although he’d suffered a punishing unanimous decision defeat by Carlos Adames last June, the Conwell bout represented a chance to defeat a higher-ranked fighter and to convince doubters he might still have the stuff of a future headliner.

“People look at my demeanour and they say you are such a nice guy, you are so well-spoken, why do you choose to box?” said Day, 48 hours before climbing through the ropes for the last time. “It’s about what’s in your heart, internally, and I have a fighter’s soul and spirit, and I love this sport. Boxing makes me happy, that’s why I chose to do it.”

A boxer’s creed. A boxer’s epitaph.