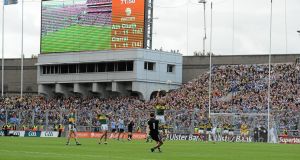 You know the adage that “a picture is worth a thousand words”.

And, in this digital age, it is somewhat reassuring to discover that there remains a demand for the printed product – to be framed onto walls, be it in clubhouses or private homes – where the work of the photographer can be showcased.

Admittedly, for the giants of the sports photography industry, which is dominated here by agencies Sportsfile and Inpho, print sales are a small part of their businesses. Yet, in its own way, it is also an important segment that enables customers to get a part of sporting history.

Think about some famous sporting memories of recent times. Inpho’s Tommy Dickson’s award-winning shot – captured from his place atop the big screen at Lansdowne Road – of Jacob Stockdale’s try against the All-Blacks, for one.

Sportsfile’s Brian Lawless’s picture of Stephen Cluxton’s All-Ireland-winning free kick back in 2011, for another. Moments in time, moments in history; captured in clarity with an eye for the action that is a skill all in its own right.

Such snapshots of history can be owned pretty much by anyone. For example, a large (18”ins x 12ins ) print of Cluxton’s winning kick is available for €55 with an extra large (24ins x 16ins) at €77. Let’s just say, these are the originals of the species.

But a growing issue for those selling their wares is of people sourcing pictures online, through social media mainly, and accepting inferior quality – and often with the photographer or agency’s trademark watermark remaining as part of the image.

One photographer recalled the story of covering a county championship match in Parnell Park, where he noticed a supporter in the crowd wearing a T-shirt with a photograph of a player.

Figuring it would make for a nice shot in its own right, he focused in on the supporter in the stand only to find that the photo on the T-shirt was one he had taken himself, complete with the watermark for confirmation. “Once it’s on the web, people think it’s free,” he said.

As Ray McManus, founder of Sportsfile, which has been to the fore of Irish sports photography for 40 years, put it: “Print sales would be a small part of our business. We believe the major element is what we call the ‘mammy, daddy and uncle mick’ in that we find at Christmas time, they buy a print of some famous occasion. Stephen Cluxton’s kick to win the All-Ireland would be one of our all-time best sellers, from a novelty sale point.

“But most of the sales would be family-related, somebody wants to have a record to give a present to son or daughter or mum or dad. We’d often notice a name on the purchase order would be similar to the subject in the picture.”

Things have certainly changed in the years that McManus became a trend-setter in establishing his sports photography agency.

“I was at a match recently and someone said to me, ‘sure everyone is taking their own pictures now’, and my reply to that is, if there was a major accident or if the stand fell in, sure everyone would have a picture of it.

“But they don’t have the ability or the lens or the wherewithal to record the vital moment on the field of play. Even I love taking pictures on the iPhone, that’s great, but to have the right gear, the knowledge and knowing what’s involved, of being in the right place at the right time, is different. The person with the phone in the stand doesn’t have that, their phone is so far away it is like a dot.

“I’m not trying to make myself out to be an artist . . . that’s the difference. If Dean Rock is going to kick a point to win an All-Ireland, you don’t get that [quality] with your phone. You’re limited by access or the quality of the cameras. You might get a picture but it doesn’t get it the way mine or whoever the sports photographer is, gets the better picture.”

Luke Duffy of Inpho recalls two particular rugby photographs of recent years getting the hits and the print sales.

“Number one in my mind is of the figure of eight which the Irish rugby team formed against the All-Blacks in memory of Axel Foley, ” said Duffy of that history-making game played at Soldier Field in Chicago, “while the other was overhead shot of Jacob Stockdale’s try at the Aviva.”

For that shot, Inpho’s Dickson had positioned himself on the walkway above the large screen at the Lansdowne Road end an hour before the match – in 2018 – with two camera bodies and three lens.

Of capturing that image, Dickson later recalled: “When you’re shooting, you know if you have something nice in frame but there is always that small voice in the back of your head wondering if it’s in the right settings or if it’s slightly out of focus . . . there is no better feeling than knowing that you have something good and it could be a potential shot that lands.”

As McManus, an old hand in the art of sports photography, put it: “It is moment dependent . . . if there is a big moment, the big moment will sell.”