Decline of Sports Illustrated leaves behind fading years of glory 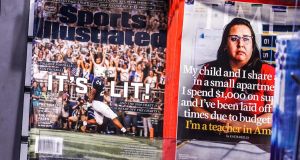 Sports Illustrated announced last week that it was laying off half its staff. Photograph: Jeenah Moon/New York Times

On the afternoon last week when Sports Illustrated announced it was laying off half its staff and Americans of a certain age sighed upon hearing one more death knell for the way things used to be, I went rooting for the edition with Ronnie Delany on the cover. A treasure unearthed one long ago summer’s day in a musty secondhand bookstore on Long Island, it originally hit newsstands on February 2nd, 1959.

After all these years, the Dubliner still looks impossibly lean and clean-cut, a woollen green singlet tucked into high white shorts, the crest of four shamrocks lounging nearly down by his waist, and a sweater draped loosely across his shoulders in the manner of an old college swell.

A portrait of a different time, a relic of another era, an illustration of how the publication and the nation evolved through ensuing decades

That Delany didn’t feature much in the article inside about the declining quality of American runners scarcely mattered. I bought it as a museum piece, an heirloom, the type of prized cultural artefact since housed in a sleeve of plastic. Sifting through the pages now, the eclectic contents offer a glimpse into the post-war world into which the magazine had emerged rather tentatively just five years earlier.

Sandwiched between columns on fishing, food, bridge, skiing and fashion, there are features on golf and college basketball, a surfeit of cigarettes and alcohol advertising, and just a single photograph of a black athlete. A portrait of a different time, a relic of another era, an illustration of how the publication and the nation evolved through ensuing decades.

The nature of that strange and wonderful journey was perhaps captured best on its 40th anniversary when Steve Rushin wrote a sprawling epic of an essay called “How We Got Here”. Ridiculously ambitious, meticulously observed, a lengthy spectacular of a type that showcased how it was possible and often best to view society through the prism of sport, something that might, indeed, have been Sports Illustrated’s mantra.

While the new owners made fatuous noises about plans to save the brand by replacing long-serving staff with low-rent freelancers, the SI of popular imagination has actually been on life support for quite some time.

Haemorrhaging half a million subscribers in the last decade, the number of issues per year recently halved from 50 to 25, and the days when it was the national benchmark for sportswriting and photography (check out the collected works of Neil Leifer) long gone, one more victim of the rise of clickbait, the dwindling of attention spans and the harsh new economic reality.

Here was a publication that once thought nothing of dispatching nearly 50 people to cover a summer Olympics. Or, as far back as 1956, sending a journalist to fly to Ireland with Delany when he returned for Christmas after taking Olympic gold in Melbourne.

That type of visionary management and canny investment eventually tasked the legendary Gary Smith with writing just four pieces a year, for which he used to famously interview 50 people on background before meeting his subject. A schedule and approach that meant near enough each one was a masterpiece of the genre.

The greatest irony of all is that, in its pomp, this essential piece of Americana was largely down to the leadership and ideas of a charismatic Frenchman named Andre Laguerre. Not the original editor, just the first to put his stamp on it, stalking the corridors of the Time & Life building with a big pointer stick, and holding court in Manhattan bars with a stable of talent (including Dan Jenkins, Frank Deford, and George Plimpton) that began to redefine the parameters of the game.

It was Laguerre, wrote Michael McCambridge in his magnificent history of the publication, who transformed “an uneven, class-conscious magazine emphasizing sporting leisure to a spectator sports-intensive newsmagazine.”

With a roster of distinguished alumni contributors that stretches from Ian Fleming to William Faulkner, Dick Francis to Don DeLillo, the list of Sports Illustrated pieces in the pantheon of American journalism is too long to run down here. But, even allowing for personal tastes, it might start with Mark Kram’s “Lawdy, Lawdy, He’s Great” from Ali-Frazier II, acknowledged as the finest piece of deadline reportage ever, would surely include Deford’s profile of Billy Conn, “The Boxer and The Blonde”, Rick Reilly’s account of Jack Nicklaus winning the 1986 Masters, and just about everything Smith or the late, great William Nack ever put their name to.

Work of that calibre was the reason why more than three million Americans used relish going to the mailbox each week to savour so much exquisite prose that invariably unveiled the story behind the story.

Like its ageing readership, however, Sports Illustrated started to sag with the onset of middle age, clinging far too long to the annual swimsuit edition, a prurient yet apparently still lucrative anachronism, and, among other errors of judgment, relentlessly cheerleading Lance Armstrong even as journalists in Europe were posing serious, legitimate questions about the specious nature of his feats.

For all that, a magazine that brought so much pleasure getting put out to pasture at 65 (or being turned into a content mill, whatever that is) is an occasion for lamenting and hand-wringing. Houses all over America private.