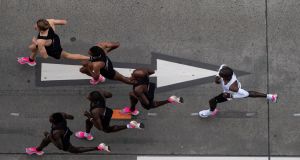 Eliud Kipchoge (in white) became the first man to run a marathon in under two hours and made it look easy in Vienna as he finally dipped under two hours finishing in 1:59:40 seconds. Photograph: Christian Bruna/EPA

In the space 36 hours last weekend the state of elite marathon running changed forever. Across two continents the benchmark for the men and women’s fastest times were elevated to another level.

First, Eliud Kipchoge from Kenya ran in Vienna and made it look easy as he finally dipped under two hours finishing in 1: 5940 seconds. As impressive as that was, it was never actually in doubt.

Meanwhile across the pond in Chicago on the banks of Lake Michigan, Brigid Kosgei – also from Kenya – was carving out her own piece of history, smashing Paula Radcliffe’s 2:15.25 set 16 years ago at the London marathon.

That was another mark that seemed so out of reach very few even dared to chase it. As much as Kipchoge’s sub two hours was a mere formality, Kosgei’s record attempt seemed to go largely unnoticed. There was nowhere near the anticipation of the historic run by Kipchoge in Vienna the day before.

Still, Kosgei had some fine form going in with a half marathon 64:28 at the recent Great North Run; that was a clear indication that she was capable of surpassing Radcliffe’s mark, only no one could have predicted she would run 81 seconds faster, stopping the clock at 2:14:04. Just one Irish man, Kevin Seaward, has surpassed this time this year.

Just like Kipchoge had his phalanx of pacemakers, Kosgei had two male pacemakers to assist her and get her just shy of 40km. From there she was left to run alone over the final two mile, just as the wind picked up and she faced a short incline before turning into the finish line.

It was equally impressive that she could maintain such a constant pace, and only marginally slowed just five seconds over the second half of the race.

For many years now the sub 2:20 marathon for women has become more achievable with 31 athletes from seven different countries managing the time over the past 18 years.

After last weekend I think 2:20 has become the new benchmark for women, down from 2:25. More and more athletes are going to believe they can reach this once near impossible mark; just like more male athletes will start to target the sub two-hour marathon, and we can definitely expect there will be a definite shift in the pace these runners start out at.

It’s hard to believe the glass ceiling has been pushed through once again on the same weekend, yet with two very different approaches.

Still much of Kipchoge’s performance has divided athletics fans; the purists versus the more embracing change athletics fan. He had the assistance of his team of 41 pacemakers and Nike shoes that had a triple carbon plate sandwiched with even more zoom X foam, the smoothest road you can imagine, cheered on by a massive crowd who came to see history being made.

Everything was in his favour, yet he still had to physically run 42.2km. There were no shortcuts.

The pace barely fluctuated throughout the race, at most by two seconds above and below the fixed pace of 2:50/km. That’s 68 seconds per lap of an athletics track, these times on their own are achievable by many. This is what makes me believe in Kipchoge and have faith.

Still there are so many out there who are afraid. We’ve been here before and been let down. It’s a sad way to be when you can’t appreciate greatness because of some shady characters that have come and gone before.

Even Kosgei’s demolition of Radcliffe’s 16 year old record can be rationalised if you break it down; 3:10/km 5:06/mile again many can achieve this pace on its own so why would it not be possible for an athlete that has dedicated their life to training at the highest level? But once again we are wary of the past and she thinks she can go faster maybe even knocking on the door of 2:10.

Maybe if she can manage to close off the same park in Vienna, recruit some pacemakers and upgrade to the Nike triple decker shoes. Even then I’m not sure if we might be entering questionable territory, maybe sub 2;12 on a perfectly orchestrated day in Vienna.

It was interesting to watch as Kipchoge was escorted to within 500m of the finish line; as if he was being held back, contained between the pacemakers and the specially marked single lane around the Prater park with perfectly wide, perfectly cambered turns that allowed Kipchoge to maintain a steady flow and hardly feel the turns.

While over in Chicago, Kosgei, had to face a late race incline on the otherwise pancake flat course. And also look out for wheelchair competitors and a few stray male runners who must’ve been shocked as she sped by waiting, to be directed to the appropriate side of the finish line.

There was very little thinking for Kipchoge. Just settle into the pace and zone out until that last 500m with 10 seconds to spare he was set free to wave and smile. That was the fastest 1,000m of the challenge, 10 seconds faster than any other kilometre in the race, a pace that may be a bit out of reach for most.

The concept doesn’t sit well with everyone but this was a project that started out with Nike Breaking 2 in 2017, on that day Kipchoge was just 25 seconds short so it needed to be completed.

Every factor had to be improved and that included bringing an audience. After all sport is entertainment and is always better performed in front of excited fans than empty stadiums.

Even though Kosgei finished first woman in a field of over 44,000 runners Kipchoge’s achievement and the event will have reached so many more people and re-engaged more people with the sport of athletics. Maybe a similar set-up is required to push the limits of female marathon running.

It is not something that can be repeated very often. Now it needs to go back to racing for Kipchoge. He has ticked so many boxes along the way you have to wonder what is next potentially a dual race with Kenenisa Bekele from Ethiopia, now the second fastest marathoner of all time with his 2:01.41 run in Berlin just last month. Just two seconds shy of the official world record held by Kipchoge.

This is boom time for marathon running, and at the pointy end more athletes are realising when you specifically prepare with a target in mind anything is possible.

I am a believer as when I break it down it’s possible. But I was also a believer of Lance Armstrong, I truly hope this is not another fairy tale with a nasty ending and the inspiration from the weekend can be used to reset the bar.

As Kipchoge said: “who sets the limits?” Maybe we need to embrace modern progression and let athletics enter the modern era where anything is possible. And if you want to run faster there are so many variables to consider, not least those Nike triple decker carbon plate and zoom foam shoes, which in a few shorts appears to have changed marathon times forever.