Dave Hannigan: Delle Donne one of the most compelling characters in American sport 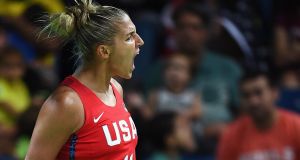 Elena Delle Donne: has been breaking scoring records as she bids to lead the Washington Mystics to a WNBA title. Photograph: David Ramos/Getty Images

Visitors to the website for Delle Donne Designs recently discovered that the company is not taking any new orders until later this month.

The woman responsible for creating and making their sought-after bespoke wooden furniture is otherwise engaged right now, trying to lead the Washington Mystics to a WNBA title.

When not carpentering humble timber into boutique tables, Elena Delle Donne may be busy writing the latest in her series of children’s novels, serving as a judge in the capital’s gay pride parade or piecing together the most accurate scoring season in women’s basketball history.

She’s the first female to ever score over 40 per cent from three-point range, over 50 per cent from play and over 90 per cent from the free throw line. That Larry Bird and Stephen Curry are among the eight men who have managed that statistical trifecta in a single campaign puts the achievement in stark perspective.

Still, the uber-efficient numbers and the fact she’s just been voted league MVP for the second time only partly explain why the 6ft 5kin Delle Donne is one of the most compelling characters on the American sports landscape. Her backstory is as fascinating as her free throw technique (above 97 per cent this year) is flawless.

At three years old, she was so tall her mother was accosted by a woman in a supermarket, complaining:, “An eight-year-old shouldn’t be using a pacifier!”

She picked up a basketball for the first time at four, was playing in a U-12 boys’ league at seven, and, by her early teens, was on the radar of every college basketball scout.

It was no surprise when Delle Donne subsequently enrolled at the University of Connecticut in the summer of 2008, a bona fide high school legend looking to take her game to the next level on a campus whose women’s teams have dominated collegiate sport for decades. So far, so predictable.

She walked out of the most prestigious programme in America after just two days, confessing to having lost her passion for the game that was presumed to define her.

Like many prodigies earmarked for greatness from early on, she was burnt out and also more than a little homesick for her older sister Lizzie, who was born deaf, blind and suffering from cerebral palsy. The preternaturally gifted athlete rediscovered her love for sport by playing volleyball for fun at a local college and spending her spare time hanging out with the sibling that has taught her more about life than anybody.

“Therein lies one of the biggest lessons Lizzie has taught me: communication is so much more than words. That lesson has transcended all of my relationships. It’s changed how I communicate with those that I’m closest to. Language is important but actions – doing, touching – is above all. Giving someone a huge hug is sometimes way more effective than saying anything.”

That life experience has moulded her character and shaped her career. After eventually returning to college basketball at the University of Delaware, transforming their fortunes despite battling debilitating Lyme disease, Delle Donne was drafted to the WNBA.

After an initial successful stint in Chicago, she has truly flourished in Washington, not coincidentally just a couple of hours drive from her family home. Unlike so many other stars in the women’s league where the maximum salary is $115,000, she has mostly eschewed lucrative offers to play abroad in the off-season, preferring to spend her downtime around her sister, and with her wife Amanda.

It says much for Delle Donne’s ability to keep sport in perspective that she chose to come out by casually mentioning her same-sex relationship in an interview with Vogue. The article was published when she was playing for the USA at the 2016 Olympic Games and her handling of the subsequent media interest in the news was note perfect.

“I’ve grown up in a family where I have the most unique sister in the world and we’ve always been taught to celebrate uniqueness,” she said. “It was easy for me to be who I am and hopefully others can be who they are as well.”

In the years since, she has become one of the more vocal figures in basketball. She has called for a change to the distaff version of the sport, arguing the rims should be lower than in the men’s game because the average female player is five inches shorter.

Some of her peers balked at the very notion, and a few pointed out the irony of the behemoth who is the most accurate shooter ever asking for scoring to be made easier. Delle Donne has also clashed with Adam Silver, commissioner of the NBA (owners of the WNBA), for his critique of the league’s struggle to attract larger audiences.

Online and later on per the airwaves, she pointed out Silver needed to pump more money into promoting the league and marketing its biggest stars, arguing that, aside from great players, the women’s game is full of absorbing, charismatic characters with interesting stories to tell. Delle Donne herself being, obviously, a case in point.