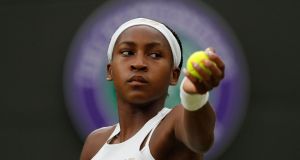 Coco Gauff is one of the most enthralling figures in sport right now. The 15-year-old is certainly a branding godsend for tennis.

Charismatic, brilliant and American, identifiable around the globe by just her nickname, she promises to be the face of the game for two decades to come. More immediately though she presents tennis with a dilemma between ethics and expediency.

There to protect teenagers from burnout, the restrictions are an acknowledgment of the threat of too much too young. The rule was originally introduced in 1994 after a number of high-profile cases when adolescent tennis stars crumbled under the pressure of competing in elite adult sport while still basically children.

Jennifer Capriati was just 13 when featuring on the cover of Sport Illustrated. A year later she reached the French Open semi-final on her Grand Slam debut. She was an Olympic champion in 1992. But the struggle to balance everyday life with what was required to succeed in a ferociously competitive world became hopelessly lopsided.

Ordinary teenage rebellion got played out in a glare of publicity. Desperate for normality, the US wunderkind drifted in and out of the game, disenchanted and unhappy.

Eventually, and to her immense credit, Capriati staged an unlikely rally to become world No 1 and a triple-Slam champion until forced to retire at just 28 with a shoulder injury.

If it’s impossible to definitively link that physical problem with the strain of competing at such a young age then to argue the problems Capriati subsequently endured with depression and drugs, as well as run-ins with the law, is surely too big a stretch to put down to coincidence. Her tale smacks of a commercial machine chewing up a star before spitting them out to fend for themselves.

Such stories are hardly unique to tennis. History is littered with prodigies who briefly shone only to ultimately fail to fulfil their promise. And then there are those precocious talents who mature into the real thing.

One of football’s hardiest clichés relates to being old enough if good enough. Lionel Messi made his senior debut at 17. Wayne Rooney was 16. Pele lit up a World Cup at 17.

Even closer to home teenage precocity gets tested against adults. In July a 14-year-old boy lined out for Bohemians in a friendly against Chelsea. He did well too by all reports. Subsequent expressions of unease at his appearance, however, testifies to the blurry moral landscapes that can come to play in such scenarios.

When is young just too young? At what point does it become unreasonable or even exploitative to pitch young teenagers into the cauldron of adult competition? Does leaving such decisions up to the individuals themselves represent a convenient cop-out. It’s a rare teen who doesn’t think the world would be a much better place if they were in charge.

Then again presumptions of paternalism contain their own dangers. Much recent comment on the climate activist Greta Thunberg revolved around her age. If concerns raised for a 16-year-old in the glare of such a global spotlight often came from a good place, it didn’t prevent widespread accusations of condescension being flung around.

The age eligibility rule in tennis fundamentally comes from a good place too. Considering how the bottom line so often emerges victorious in professional sport it represents both a rare and formal appreciation of a young athlete being a young person for whom those in charge have a responsibility of care.

Of course those in charge also have a responsibility to promote the game which means Gauff is both prize and predicament right now.

The player who earlier this month became the youngest WTA tournament winner in 15 years, and was victorious in a doubles event in Luxemburg at the weekend, is a singular figure in terms of sporting precocity but also commercial appeal. She is in demand around the world and criticism of the rule that limits her chances to meet that demand is increasing.

Serena Williams’ coach Patrick Mouratoglou has been guiding Gauff’s career since she was 11 and vehemently argues against age restrictions. Not unreasonably he has referenced the former world No. 1 Martina Hingis, who won all five of her Slam titles between the ages of 16 and 18, pointing out how career momentum can occur at different times in different individual careers.

No less than Roger Federer, who’s involved in the agency representing Gauff, argues too that the rules should be relaxed. He says they can be counterproductive in impeding progress and in piling on pressure when playing tournaments. There’s ample evidence such exposure to elite competition can pay off. Federer’s great rival Rafael Nadal is a veteran now but was once a teenage prodigy as well.

Rules by definition are blunt instruments, often inflexible to specific cases. But tennis’s age eligibility regulation is a rare piece of altruism in professional sport. If nothing else it represents an ambition towards treating its young stars with one eye on their future as individuals rather than just athletes. That’s surely an ambition worth preserving.

No matter how precocious a teenage talent might be it’s still as raw and incomplete as the person. The WTA believes the best way to encourage such talent for the long term is to restrict their appearances in the short term. In Gauff’s case that means taking a hit now with the potential pay-off of a longer career later.

If that gets labelled patronising then it might be worth bearing in mind how there’s little point to getting older unless you get a little wiser too.