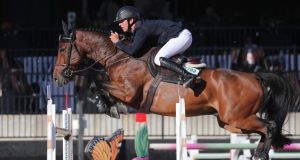 Ireland’s Bertram Allen won the $72,000 jump-off class in Tryon, North Carolina on Sunday to notch up his second five-star victory of the week on Lafayette Van Overis.

Three Irish riders progressed to the second round of this 1.50m competition where Wexford native Allen recorded the fastest double clear (33.564) with Ballywalter Stables’ eight-year-old Belgian Warmbood gelding on which he took over the mount in July. The USA’s Ali Wolff finished second with Casall (34.516) while her compatriot, Lille Keenan, was third on Fasther (34.724).

On Friday, Allen landed the 1.45m speed class with Lafayette Van Overis however on Saturday, riding GK Casper, the Germany-based rider failed to qualify for the jump-off of the $384,000 Grand Prix won by the USA’s Mclain Ward on Noche de Ronda (32.837). Here, the best placed Irish rider in fourth was Daniel Coyle on Farrel (35.262) with Captain Brian Cournane a place further back with Armik (35.330).

On Sunday, at Herning in Denmark, 15-year-old Alex Finney from Co Down partnered Still Got Me to land the first qualifier in this year’s FEI Jumping Ponies Trophy. First to go in the 14-way jump-off, she set a target an unbeatable time of 42.40 while fellow Irish riders, Rhys Williams and Ryan Sweetnam, were fifth and sixth on K-Little Hero d’18 (44.56) and Kilcummin Cruise (four faults in 42.26).

In eventing, the show jumping phase of the FEI World breeding championships for young event horses had a major effect on the results of the three competitions as the ground in the grass arena at Le Lion d’Angers in western France cut up badly.

In the breed championship, where the top three representatives counted, the Irish Sport Horse studbook (which had 28 participants overall) slipped from first place after cross-country to second (95.1) at the end of the event behind the Stud-Book du Cheval Selle Francais (15) which won on a penalty score of 93.8.

Among the 11 representatives of the Dutch Warmblood Studbook which finished third (97.7) was Happy Boy which, 13th after dressage, won the seven-year-old gold medal under New Zealand’s Tim Price.

The Indoctro gelding finished on his first phase score of 30.1 ahead of the USA’s Liz Halliday-Sharp on the ISH gelding Cooley Moonshine (30.5). Britain’s Tom McEwen, who had led going into the show jumping phase with the ISH gelding Brookfield Benjamin Bounce, had a fence down to finish third (31.2). The highest-placed Irish rider was Hillsborough’s Clare Abbott who had a disappointing final phase as eight show jumping penalties resulted in her slipping from sixth to 12th with the ISH gelding Jewelent (37.7).

Britain’s Piggy French recorded her 15th international victory of the year when winning the six-year-old championship on the Swiss Sport Horse gelding Cooley Lancer which, third going into the final phase, completed on his dressage score (26.7). The chestnut by Coeur de Nobless M was campaigned here last year under the name Cooley Code Red when ridden by Katie O’Sullivan for Cooley Farm.

French rider Thomas Carlile was second with the Selle Francais stallion Dartagnan de Beliard (28.3) while Norway’s Yasmin Sanderson, who led going into the final phase, dropped to third having had a pole down on the Dutch Warmblood gelding Inchello DHI (30.3). The best-placed ISH was the Sligo Candy Boy gelding Global Candy Boy (33.4) which was seventh under New Zealand’s Jesse Campbell while the highest-placed Irish rider in this section was Co Meath’s Elizabeth Power who was eighth on the Shannondale Sarco St Ghyvan mare Shannondale Mari (34.1).