Dave Hannigan: Five consecutive weekends with attacks have led to ramped up security 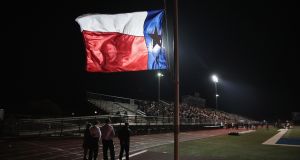 A Texas flag flies at half mast during a prayer services at the La Vernia High School Football stadium to grieve the 26 victims killed at the First Baptist Church of Sutherland Springs on November 7th, 2017. Photo: Scott Olson/Getty Images

They call them peewee leagues because they are specifically designed to give little kids a gentle first entry into the world of organised sport. The fare on offer at Eastern Hills High School in Texas last Saturday week was typical of the genre. An under-6 flag football match between the Fort Worth Longhorns and the 81G Bulldogs, the fierce team names belying the fact most of the participants aren’t that long out of nappies, earnestly trying to learn the rudiments of the national game through a tackle-free version of grid-iron akin to tag rugby.

When a scuffle broke out on the field, both sets of parents began exchanging unpleasantries because watching kindergarteners gambolling around at nine in the morning will have that effect on some people. Thirty-nine year old Holly Chinita, whose child was playing for the Bulldogs, got so angry she threatened “to spray” the place. Moments later, one of her teenage sons appeared on a hill nearby and tried to do just that. He fired between 10 and 30 shots at the Longhorns’ sideline, wounding a mother pushing a 3-month old in a stroller.

The gunman remains at large, Ms Chinita has been charged with making terroristic threats and when kids and adults turned up for matches in the Texasport youth league last Saturday, there were armed guards posted at the entrances and security personnel checking every bag. This was deemed necessary so five-year-old boys can throw and catch footballs without fear of being shot. Like it’s the most normal thing in the world.

What is even more alarming about the story is it’s merely the latest in a litany of incidents involving gun violence at high school fields across America. While the Trump administration has suddenly decided vaping is killing kids at an alarming rate and must be stopped immediately, there have been shootings at grid-iron games for five consecutive weekends.

In Philadelphia last Friday night, shots rang out during a game between Mastery Charter and Imhotep Institute Charter at Simon Gratz High School in the north of the city. The sound of gunfire spread panic in the stands, footage shows hundreds of spectators streaming across the field as the PA Announcer appeals for calm. When police finally came on the scene, they found two teenagers suffering from gunshots. Although the gun was fired just outside the stadium, it had been close enough to make many believe they were in the midst of a mass shooting and needed to flee for their lives.

Eight days earlier, it was a similar story in Newport News, Virginia. Minutes after the conclusion of a high school football match between Woodside and Denbigh, as the car park of John B. Todd Stadium filled up with fans and families, shots rang out. A 14-year-old and two 19-year-olds were wounded in that fracas. In the aftermath, there was some dispute about the motivation involved and authorities were unclear whether it had anything to do with rivalry between the schools. However, the police did assure everybody there would be more armed patrols at games for the rest of the season. As you do.

Jeannette City, just outside Pittsburgh, has also ramped up security for matches at McKee Stadium, hiring new guards and introducing a metal detector wand for all kids and adults attending high school games. This follows the death of 40 year old Greg Harper in the car park there earlier this month. As Jeanette entertained Imani Christian Academy on a Friday night, Harper was seen getting into an altercation with 48 year old Dameian Williams in the bleachers. Obviously not wanting to interfere with the on-field action, they took the argument outside and Williams has since been charged with homicide and reckless endangerment.

The ages of the men involved in that incident lend credence to the theory not all of these shootings are related to the institutions involved. Some, it appears, are merely down to individuals using the communal weekly gathering that is high school football as a venue to target perceived enemies. That was the motivation cited in the bloodiest episode of the recent spate. On the last Friday in August, 10 people between the ages of 15 and 18 were hurt during an encounter between LeFlore and Williamson high schools at Ladd-Peebles Stadium in Mobile, Alabama.

Chilling video from that night shows players and coaches cowering on the sidelines, desperately trying to hide under the stands as the sound of gun fire competes with the shrieks of panicking spectators. Deangelo Dejuan Parnell, 17, has been charged with multiple counts of attempted murder amid reports he got involved in a fight, pulled out a gun and started shooting indiscriminately. As always, the local police and education officials have made all the obligatory noises, tut-tutting, among other things, about the need to teach kids to resolve conflicts by non-violent means.

They’ve also assured parents and students that every effort is being taken to ensure this kind of thing won’t happen again, and are talking about bringing in metal detectors across all nine venues that host high school games. Like districts all over this country with more than 300 million guns in private possession, Mobile has discovered that something along the lines of airport security is now required at matches involving teenage boys. The new normal. Which, lest we forget, is not normal at all.