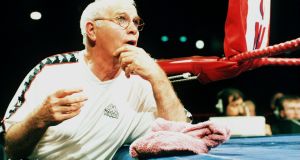 The boxing trainer Brendan Ingle, who has died aged 77 after a brain haemorrhage, could rightly be viewed as one of the most important men in the history of the sport in Britain. Not only did he train world champions, most notably Naseem Hamed, but he also changed the style in which they fought, by emphasising the importance of speed, reflexes and movement rather than the more traditional virtues of power and durability.

From his gym in an old church hall in Wincobank in the tough east end of Sheffield, he produced a succession of brilliant fighters and effectively founded a boxing dynasty. His sons, Dominic and John, continue to work with current fighters who have become world champions, including Billy Joe Saunders and Kell Brook.

Born in Dublin, one of 15 children of Charles Ingle, a dockworker, and Sarah (nee Lawless), Brendan went to Haddington Road school and began boxing as a boy. He followed one of his brothers, Peter, to live in Sheffield as a teenager, in 1958, working in the steel industry and augmenting his income by becoming a professional fighter. By his own admission, it was soon apparent he would never reach championship standard, and when he retired in 1973 he had won 19 of his 33 paid contests. As it turned out, his story had only just begun.

His local vicar asked Ingle to help run a youth club, and his ability to communicate with troubled and often violent youngsters quickly established him as a hugely respected member of the Sheffield community, who changed the lives of hundreds of those who came to use the St Thomas’ Boys and Girls Club boxing gym.

Like so many of his generation, Ingle had grown up hero-worshipping the world heavyweight champion Muhammad Ali, and he tried to teach his young proteges to fight in the same style as “the Greatest”, emphasising the virtues of balance and footwork as much as aggression. Ingle-trained fighters became known for their defensive skills as much as their big punches.

His first great fighter was Herol “Bomber” Graham, who did not become world champion but was good enough to become a British and European title holder. Such was his defensive prowess, Graham was avoided by peers such as Nigel Benn and Chris Eubank. To illustrate his skills, Ingle would tour prisons with his star fighter and invite inmates to give him their best shot. Graham, with his hands behind his back, would make them miss embarrassingly.

But Ingle’s greatest single achievement was in shaping the career of “Prince” Naseem Hamed, who was brought to his gym as an unruly seven-year-old by his father. Ingle, perhaps embellishing the truth, said he had spotted Naz from his seat on a bus while the little boy was being picked on by a group of lads in school playground. “Nobody could touch him,” Ingle said. “That’s when I knew he was special.”

Once, while working for BBC Radio, I ventured to Sheffield to interview Graham before one of his title fights. Ingle was as proud of Hamed as he was of his top boxer. “Here, look at this cocky little thing,” he would say while encouraging the 11-year-old to bounce off the ropes of the ring, perform acrobatic hand springs and shadow-box. “One day he will be champion of the world.”

Hamed went on to fulfil the prophecy, winning the world featherweight title in 1995 and becoming, for several years, the biggest star in British boxing. But the relationship with Ingle began to sour. “He told me he would not be running any more. Things changed. Money had become the most important thing to him.”

The split with Hamed finally came in 1998 around the time of the boxer’s world title defence against Wayne McCullough. It was a falling out never properly reconciled. “I’m disappointed because he could have been greater and certainly more popular if he’d only listened to those who knew what they were doing,” Ingle said later. “People never saw the best of him. I believe that he could have been a world champion at every weight from flyweight to middleweight. The way he treated people like Frank Warren, who promoted his world title fights, it was scandalous. He couldn’t handle the wealth that came to him.”

Despite the success and money he earned from boxing, Ingle remained unchanged. Living in a modest house on the same road as his gym, he was never one for flashy clothes or cars. Instead he would love to share his success stories, such as the British middleweight champion Brian Anderson. “He was a right tearaway,” Ingle would say. “I would say if it wasn’t for boxing, he would have been in prison. Well, I was right. He became the governor of Doncaster prison.”

Ingle was appointed MBE in 1998 for his services to boxing and work with young people, and in 2002 was awarded an honorary doctorate by Sheffield Hallam University. In 2008 Sheffield city council honoured him as a “Sheffield legend”. Although his memory had begun to fail in recent years, Ingle remained a regular in his gym, where his son Dominic continues as head trainer.

He is survived by his wife, Alma (nee Chaloner), whom he married in 1961, their five children, Brendan, Bridget, Dominic, John and Tara, and 14 grandchildren, and by four brothers and three sisters. - Guardian service