International aspect a real positive for Irish crews this weekend 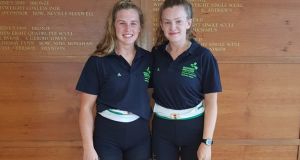 Eliza O’Reilly and Gill McGirr, who are set to compete at the British National Schools Championships this weekend.

Rowing has a strong international aspect, even at underage level. This is a real positive for Irish crews this weekend.

Dublin Metropolitan (Metro) regatta, scheduled for Saturday, was cancelled on Thursday because of a worsening weather forecast. However, some of the top juniors in the country - many fresh from Ireland trials - were already preparing to compete at the three-day British National Schools’ Regatta on Dorney Lake, which begins today, Friday.

Despite the name, the event at the 2012 Olympic venue is open to clubs as well as schools, including from the Republic of Ireland. Rowers from St Joseph’s in Galway have a good record and a big contingent travels. St Michael’s of Limerick are dipping their foot in the water with a set of mostly young competitors.

Some Irish athletes will have hopes of glory in high-profile races. In the girls’ championship singles, Molly Curry from Coleraine Grammar School, Ciara Moynihan from Workmen’s and Ruth Carson from Bann are all set to compete. British rower Holly Dunford from the Molesey club may be favourite.

The girls’ championship double sees Annie O’Donoghue and Ciara Browne go into action for the first time since the Ireland selectors gave them the nod for the World Championships. The Workmen’s duo team up with Moynihan and Miriam Fleming in the girls’ championship quadruple, where the oppositions includes Bann.

In the girls’ championship pair, Fermoy are represented by Gill McGirr and Ellie O’Reilly - gold medallists last year on both days in the Coupe de la Jeunesse. Galway also compete.

Enniskillen RBC have travelled with a boys’ eight and pair (Odhran Donaghy and Nathan Timoney), along with a girls’ junior 16 coxed four and junior 16 pair. All are medal contenders. The Enniskillen girls’ eight is not taking part because of exams, but Galway and St Michael’s have crews entered in the girls’ championship eight.

In the boys’ championship singles, Bann’s Aaron Christie, another Ireland triallist, will hope to be a contender. St Joseph’s and St Michael’s have also entered.

As in this part of the world, the conditions on Saturday may be difficult - there will be a crosswind, which can be testing on Dorney Lake.

Belfast Sprint Regatta is set to go ahead on Saturday, with a long day of two-boat racing.

The cancellation of Dublin Metropolitan Regatta came in an all-too-familiar fashion. A week ago everything was good to go. As the days went by the forecast worsened: by Thursday, Met Éireann was predicting winds of 25 kilometres per hour on Saturday afternoon on Blessington Lakes, with gusts. The direction of the winds would have been diagonally across the course, and crews going up to the start might have been in danger.

“We couldn’t chance it,” said Jimmy O’Neill, the regatta secretary. Metro cancelled - as Skibbereen and Lough Rinn had before them.

At best, this gap-toothed Irish domestic season will now have just one Grand League Regatta, with rowers crossing their fingers that Cork’s two-day event at the National Rowing Centre (June 23rd and 24th) goes ahead.

As O’Neill points out, Saturday may be a lovely day for most people. But high winds are the enemy of big rowing events.

The focus will switch to O’Neill’s native Carlow. Their regatta next weekend (June 2nd and 3rd) has a huge entry, most of it coming from junior ranks. Some of the top senior crews will have decamped to Dorney in England to test their mettle at (London) Metropolitan Regatta.

The Ocean to City/An Rás Mór event in Cork harbour has drawn a fine rowing entry this year. As of Thursday 87, rowing boats were entered for the race on Saturday, June 2nd. Rowers from Spain, the Netherlands, Germany and America are entered.