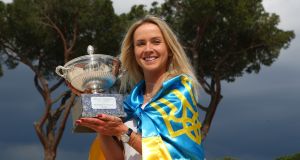 Elina Svitolina poses with the trophy after the defeating Simona Halep in the final of The Internazionali BNL d’Italia for the second year in a row. Photograph: Julian Finney/Getty Images

Svitolina raced through the opening set in just 19 minutes and broke early in the second on her way to a 6-0 6-4 victory, an eighth straight final victory improving her overall record to 12-2.

The 23-year-old Ukrainian was in ruthless form, breaking in the opening game of the match and twice more in the opening set, losing just three points on her serve in the process.

Halep committed 11 unforced errors in the first set and won just eight points, so it was no surprise to see her coach Darren Cahill come on to court to offer some advice after the fifth game.

But although the Romanian finally won her first game at the start of the second set, Svitolina quickly broke for a 2-1 lead and held serve to consolidate the break.

Halep then left the court to receive treatment on an apparent back injury and kept her slim hopes alive by saving three break points in the seventh game.

However, Svitolina was not to be denied the third successful title defence of her career – and second this year – as she served out to seal an impressive win.

“It’s amazing that I could come and defend my title here,” Svitolina said after defeating Halep in the Rome final for the second year in succession. “It’s really something very special for me.”

On this form Svitolina will be among the favourites for the French Open later this month, but she is not about to take anything for granted.

“I will try to take one match at a time, it’s very important in a Grand Slam,” she added. “It’s very tricky so we’ll see how it goes, but definitely I’m going to enjoy [going to] Roland Garros on a high note.” – PA