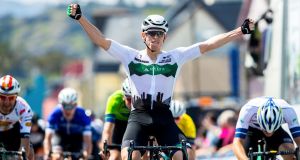 He was one of the main aggressors on Tuesday’s stage but came away empty-handed after he was caught on the run in to Listowel. One day later, Jason van Dalen (Netherlands Delta Cycling X) got things perfectly right at the Rás Tailteann when he won stage four into Glengarriff. He was part of a select group which emerged over the difficult mountains en route to Glengarriff, then beat Irish-based Italian Matteo Cigala (Westmeath Viner-Caremark-Pactimo), Robbe Ghys (Belgian National Team), Jacob Rathe (USA Jelly Belly p/b Maxxis) and others to the line.

“The weather was beautiful, the views were stunning and I really enjoyed the stage,” he said.

Best of the Irish was Ronan McLaughlin (Westmeath Viner-Caremark-Pactimo), who finished eighth and took over as the best county rider. He was a former international rider with the An Post Seán Kelly team and, after ending his stint with the squad several years ago, appears to be enjoying his best form in quite some time. “Before, I didn’t have much motivation to do a lot of specific training. Whereas now I am really enjoying my bike. For the last three, four weeks I am struggling to sleep, because I am actually excited to get up and get out on my bike,” he said.

The race continues on Thursday with a flatter 150.2km from Glengarriff to Mitchelstown.