Boxing trainer Brendan Ingle has died at the age of 77 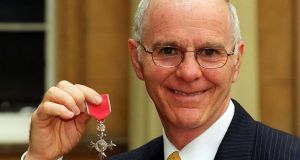 Brendan Ingle displays his MBE in 1999. The boxing trainer has died at the age of 77, the British Boxing Board of Control has confirmed. Photograph: Fiona Hanson/PA

In a sport that sometimes seems to be a never ending conveyor belt of interesting personalities, Brendan Ingle ranked among the brightest.

Ingle, who was born in Dublin and grew up in Ringsend, has died at the age of 77 and was one of the most highly regarded and out spoken coaches of his generation.

An old school practitioner, Ingle preached life values to the boxers in his Wincobank gym in Sheffield as much as he did showing them how not to be hit by opponents.

Ingle even tried the impossible by attempting to instil humility into one of the most talented boxers Britain has ever produced, Naseem Hamed. As well as Hamed he helped three other boxers to world titles including Johnny Nelson.

Such was his reach in the Sheffield community beyond the walls of his gym, situated near St Thomas church, Ingle was awarded an MBE in 1998 for his services and contributions to British boxing. The BBC reported that Ingle had suffered a brain haemorrhage.

Ingle never forgot his working class back ground and his roots in Ireland and visits to his house in Sheffield, which was just up the street from the gym, inevitably turned into conversations on politics and social issues.

He was an opinionated, self educated and well read man, who understood the back grounds and histories of the kids, who came to his gym.

Many of them were troubled children often from broken homes and mixed race families, who were ‘running wild’ in the area. That was his motive for opening the boxing club.

He embraced the concept of the gym as a safe place for his boxers, where respect for the Muslim and Christian faiths of his members as well as humility were key stones of his boxing training.

“Just heard about the passing of Brendan Ingle,” Eddie Hearn, the promoter of Katie Taylor, wrote on Twitter. “A sad day for boxing, he did so much for the sport and the community. Our thoughts with Dom, John and all the family. Rest in Peace.”

Former WBA lightweight world champion Anthony Crolla wrote: “Just seen the sad news about Brendan Ingle. What he created at the Wincobank gym with his sons and others is a very special piece in British boxing history.

“My thoughts and prayers are with his family and friends. RIP.”