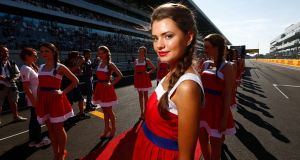 Russia want to bring back their grid girls, because they are “the most beautiful”. Photograph: Getty Images

Formula One is in a bit of revolt.

Its new owners banned the use of grid girls in January, saying that it would no longer use female models in opening ceremonies at grands prix because the practice was inappropriate. It instead honors children involved in youth racing during the ceremonies. So the women did not appear in the first five races this season.

But they will be back on the grid this weekend for race No. 6, as some race organizers in Monaco defy the sport’s owners, the Liberty Media Corporation.

“We’ve had no problems with Liberty Media, except for the grid girl issue,” Michel Boeri, the president of the Automobile Club of Monaco, told Monaco-Matin, a local newspaper. “They’ll be there, on the grid.

“They’re pretty, and the cameras will be on them once again.”

After Monaco’s announcement, Russia joined in, saying the women would also appear at its race in September.

“We do not want to give up the girls,” said Sergey Vorobyev, the promoter of the Russian Grand Prix. “They are wonderful. We are developing creative approaches that will allow the girls to remain next to the cars.

“It could be athletes. It could be representatives of the world of Russian art. But my task is to have our girls still going on the starting grid.”

Vorobyev’s plans are backed by the Russian government.

“Children are appropriate in football, but in the automotive industry, there were always girls, and it looked quite appropriate,” said Dmitry Kozak, the Russian deputy prime minister.

“If we can reach an agreement we will revive this tradition. Moreover, our girls are the most beautiful.”

A year after taking control of Formula One, Liberty announced in January that it would be doing away with grid girls. Amid the #MeToo movement and a growing effort to increase the role of women in STEM (science, technology, engineering and mathematics) careers, the sport decided that to have them serve a purely decorative function was anachronistic and counterproductive.

“Over the last year we have looked at a number of areas which we felt needed updating so as to be more in tune with our vision for this great sport,” said Sean Bratches, managing director of commercial operations at Formula One.

Instead, Formula One announced the Grid Kids partnership, which has national sporting authorities nominate young local racers to take part in the prerace opening ceremony at each race. The Grid Kids, already experienced in karting and junior racing, made their debut at the season-opening Australian Grand Prix in March.

“While the practice of employing grid girls has been a staple of Formula One Grand Prix for decades, we feel this custom does not resonate with our brand values and clearly is at odds with modern-day societal norms,” Bratches said. “We don’t believe the practice is appropriate or relevant to Formula One and its fans, old and new, across the world.”

“For the wider FIA, this is an excellent initiative that provides additional support to our member ASNs in their efforts to grow motorsport worldwide through a unique reward they can make available to youngsters participating in their national series,” he said, referring to the Association Sportive Nationale.

The return of the grid girls will be welcomed by some Formula One drivers, many of whom had opposed the ban.

“I think I’m a traditionalist, and I like to hold onto certain things,” said Sebastian Vettel of Ferrari, a four-time world champion. “There’s a lot of things I’m not a specialist in, and I don’t need to understand,” he said, adding, “I’m a bit sad that there are no more grid girls.”

Vettel’s comments were echoed by his colleagues, with Pierre Gasly, in his first season racing for Scuderia Toro Rosso, saying, “I find it a shame because grid girls were part of the DNA and the glamorous side of Formula One.”

Nico Hulkenberg of Renault F1, also opposed the ban, calling it “a step backward for the sport.”

“It would be a pity if they took the eye candy from the grid,” Hulkenberg told the German newspaper Bild.

No other circuit has joined Monaco and Russia in saying they will defy the ban, but the United States Grand Prix at the Circuit of the Americas in Austin, Texas, has a long tradition of holding a prerace show that includes the Dallas Cowboys Cheerleaders. They are scheduled to perform this year.

But there is a difference between the largely functionless grid girls and the continued existence of pretty women within the sport, said Chase Carey, the chief executive of Formula One.

The reaction to the grid girl ban “has been what we expected,” he said. “We’ve had some people who have been positive about it and others who were concerned. Unsurprisingly, many long-term fans view it as part of the sport they grew up with, and I respect that.

“What we found is that a number of people anecdotally raised the issue, and as I went around what I found was there was a meaningful segment that found it. . . I don’t know whether offensive is too strong, but found it exploitative or did not find it appropriate for the world we live in today.

“I recognise that many of the grid girls were proud to do it, and I think that’s great, and again, if you left it to me, I liked it,” Carey said. “But I think when you have as many people as I found who really felt it was outdated and who felt it didn’t belong in the sport today, you have to be cognisant of that. The number that were passionately positive on the other side were much smaller.”