The Fish Health Unit carried out lab tests to determine the cause of recent carp mortalities at The Lough, Cork City and Belvelly Lake, Cobh, Co Cork 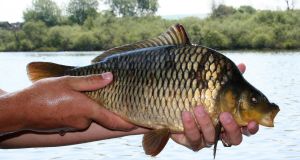 TheMarine Institute (MI) can now confirm that the virus detected in carp from the Lough and Belvelly is carp edema virus (CEV), genotype 1 which is the type usually associated with outbreaks of Viral Edema of Carp (also known as Koi Sleepy Disease) in common carp.

The Fish Health Unit of the MI has carried out tests at its labs in Oranmore to determine the cause of recent carp mortalities at The Lough, Cork City and Belvelly Lake, Cobh, Co Cork.

The institute received a sample of five moribund carp from The Lough and four from Belvelly Lake, and scientists took samples for virological, bacteriological, histological and molecular analyses.

To date, all fish sampled tested positive for CEV, however, further testing is ongoing. This includes sequencing of the viral DNA to confirm its identity, and until such time as this is confirmed, the finding is regarded as preliminary.

The gills and skin of the sampled fish revealed an extremely high infestation of trichodinid parasites along with a fungal infection. White spots on the scales were also microscopically examined but there was no evidence of Ichthyophthirius multifilius infection.

Dr Jeff Fisher, Director of Marine Environment and Food Safety Service, said: “Though the ultimate cause of the disease agent cannot be determined from current information, the loss of significant numbers of carp highlights the need for vigilance among anglers and recreational users in the cleaning of equipment, and also for fishery owners and the public to be aware of the potential risk of transferring fish that may carry disease into the wild, and to never release ornamental fish into lakes or rivers.”

The MI is the National Reference Laboratory for finfish diseases and the Competent Authority for Fish Health Regulations.

The 43rd Fermanagh Classic Coarse Fishing Festival reached a thrilling finale last weekend on the sun-soaked shores of Lough Erne. It was a very close contest, with just over a kilo separating the top two anglers going into the final day.

Tony Hopkins of Lough Gowna emerged victorious, his catch of 3kg 420gms on Cleenish Bridge enough to get him into top place on the leader board. His total over the three days of 36kg 240gms, netting him a cheque for £5,000 (€5,700) and the coveted crystal chalice.

The Classic was sponsored for the 16th year by Waterways Ireland and organised by Fermanagh and Omagh District Council, in conjunction with Inland Fisheries Division of the Department of Agriculture, Environment and Rural Affairs.

The month of mayfly

The mayfly is well up now, and fishing has been excellent for many anglers, with Corrib and Mask producing some nice fish, indeed some fine trout from Corrib, which is truly living up to its reputation as the premier wild trout fishery in Europe.

Salmon fishing is also picking up in Galway, with grilse starting to show in more numbers and some fine spring fish taken.

Fish kill near the Shannon

Fisheries staff were alerted recently to a fish kill on Ballycorrigan Stream, near the confluence with the Shannon. Here they observed about 100 brown trout of various age groups, three juvenile salmon and stone loach dead in a 100m stretch from the Ballina Waste Water Treatment Plant discharge pipe to the confluence.

Preliminary investigations by Inland Fisheries Ireland, Irish Water and Environmental Protection Agency indicate that maintenance work carried out in the treatment plant may have caused a deleterious or polluting effluent to discharge to this stretch of river.

There was a terrific turnout for the European Cup Trout Fly Fishing Championship on Lough Mask last weekend where 94 anglers from Germany, France, Wales, Scotland, England and Ireland competed for the coveted European Perpetual Cup.

The competition was run by Tourmakeady Trout Angling Association (TTAA) and all proceeds will again go towards stream enhancement and rehabilitation. Last year, €3,000 was forwarded for stream development work on Rosshill River under supervision of Inland Fisheries Ireland.

Fishing conditions on the day were excellent and with just one fish over 15in allowed for weigh-in, meant anglers had to forage in different pastures for the “big one”.

The effort certainly paid off for Ballinrobe angler Denis Kelleher who made the long journey from Cushlough to the extreme end of Maamtrasna Bay where he hit the jackpot with a fine trout of over three pounds that grabbed his Claret Dabbler.

Denis is no stranger to the winning enclosure having already won this competition in 2015. He is a great ambassador for Mask and his outstanding book Another World on Mask plots the World Cup Trout Angling Championship since its inception in 1953.

At the prize-giving and dinner in Máire Lukes restaurant, TTAA chairman, Liam Conroy thanked all those in attendance, especially those who had travelled from overseas. He said the club had adopted a catch-and-release policy six years ago in the interest of conservation and appealed for potential sponsors for next year competition.

Brilliantly in a wave

The Loop-wing Detached Body Olive Mayfly is a high-riding fly and, with CDC wings, sits brilliantly in a wave. It can also be tied in smaller sizes to imitate Olives.

To avail of the pattern, contact fly-tyer Jimmy Tyrrell at irishflycraft@gmail.com or 086-845 1257.