Trump and fear have beaten the once-powerful NFL 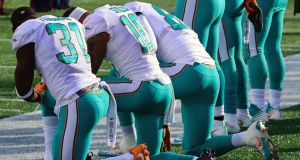 Miami Dolphins players kneel during the National Anthem before their game against the New England Patriots last November. Photograph: PA

There was a time, not long ago, when the NFL actually stood for something. When the league’s owners acted on principle and were anything but the squishy, invertebrate loafer-and-sport coat-wearing globules they have become. This was in 1991 when the NFL and its owners attacked racial intolerance by yanking the 1993 Super Bowl from Arizona because the state refused to acknowledge Martin Luther King Jr Day as a holiday.

“I think it would be an affront to our public and our players if the game was played there,” said the Philadelphia Eagles owner, Norman Braman, who was also chair of the league’s Super Bowl site-selection committee.

The league had real power in those days. The insignia that NFL people lovingly call “The Shield” truly was a weapon against injustice, dragging the leaders of an American state from their cowboy past into the modern age. Arizona changed its laws and recognised the King holiday. The Super Bowl was too big a prize to let slip away over racist ideals.

In the years since, the league’s owners have grown magnificently rich, building their teams into billion-dollar kingdoms, while also becoming fearful of anything that threatens their ability to make billions more on the backs of fans. So much so that they have let themselves be played by Donald Trump, putting their names on a national anthem policy that might be the most embarrassing document ever issued under The Shield.

Trump’s rant last September, when he expressed a hope that NFL owners would say “Get that son of a bitch off the field” to protesting players, should have been easy for the league and its owners to deflect. And yet after a few days of standing against Trump and bigotry they wavered, shriveling in the fire of a president’s tweetstorms. Ultimately, they caved. They gave Trump what he wanted, and this week they finally got those players off the field.

With a straight face, the league announced on Wednesday that while players could passive-aggressively stay in the locker room during the anthem, every player, coach, trainer, ballboy, referee and executive on the field will have to stand for the anthem or face punishment. Punishment, the policy said, will come from the commissioner. Potential offenders were identified as “team and league personnel”. Surprisingly, the policy didn’t call them “sons of bitches.”

That the NFL even made an anthem policy shows how much Trump has squashed the league and their owners over this issue. The one-page document and accompanying half-page statement from commissioner Roger Goodell, released on Wednesday, contain the phrase “show respect for the flag” five times. And those pages do not acknowledge that the anthem protest started two years ago by Colin Kaepernick had nothing to do with respect for the flag.

The protest was – and always has been – a way to draw attention to racial injustice in America. It was supposed to start a long overdue national conversation. Instead, Trump seized upon it as way to throw red meat to the red states, twisting something productive into an attack on patriotism, the military and the nation itself.

Goodell and the owners can say their new policy is about patriotism, but it reads as a ban on black players telling the world about their experiences. How Goodell and the owners have allowed themselves to do this is jaw-dropping, especially in a league where roughly 70 per cent of the players are African American.

I know many decent people who work for the NFL, people of honor and dignity, people who believe in treating everyone with respect. I also know many decent people who work for the NFL’s teams. Until today I believed that many of the owners I’ve met in the past to be good and decent people too. Deep down, I think they still are. (Indeed, there are signs some executives are uncomfortable with the new policy; New York Jets chairman Christopher Johnson says he will pay the fines of any player who chooses not to stand for the anthem.)

But fear does bad things to good people. And Trump, by waving his fake patriotism to fire up old racial hatred, has filled the once-mighty NFL and their owners with worry. They fret their league won’t seem American enough and that television ratings might drop and advertisers, who love nothing more than to drape everything from toothpaste to tires in the stars and stripes, might disappear.

The reality is, no one will give up the NFL because a few players kneeled for the anthem. Stand in any stadium on a Sunday afternoon while the anthem plays and see how many of those patriotic-to-the-death fans are chatting on cell phones or slathering their hot dogs in onions or shuffling to the bathroom. Few who go to games even remember the anthem. Nobody buys a $150 seat to hear the anthem. Fans who give up the games are giving them up because they no longer like football, not because of who might be standing or not in the long line of players on the sideline.

But such facts don’t matter. Trump and fear have beaten the once-powerful NFL. Any doubt this is an ugly game played by the White House to turn white Americans against black was underscored by a tweet on Wednesday afternoon from vice president Mike Pence.

Yes, Trump and his friends are #winning a game. A very dangerous game around racial politics. One the NFL and their owners just lost big time.