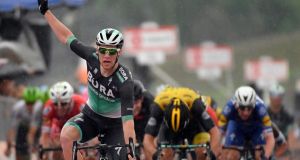 It must be two years exactly since a small group of Italian scouts came knocking on my door. Boys and girls, all just about teenagers, along with two leaders who looked no older than 20.

They had walked from the Dundrum Luas up to Glencullen, trying to find the Wicklow Way, and were looking for a place to camp after discovering Johnnie Fox’s is certainly no hostel. I was busy trying to finish this column and told them in my very broken Italian to come back in an hour or so if they were still lost.

Around two hours later they came knocking again, suddenly a slightly larger group, still lost and looking faintly desperate in the fading light and drizzling rain. The field out the back was already drenched and the only polite thing to do was invite them in. And with that they quickly spread themselves over every inch of floor space for the night.

Given their very broken English there was no conversation, until one of them noticed a small picture of Marco Pantani next to some books about cycling.

Never underestimate Italy’s love affair with cycling. These scouts weren’t even born when Pantani was in his racing prime, the last rider to win the Giro d’Italia and the Tour de France in the same year, in 1998; and most of them were far too young to remember his tragic decline, which began just a year later when Pantani was thrown off the Giro after failing a haematocrit test (a signal of EPO use), and ended on St Valentine’s Day 2004 when he was found dead in a hotel room in Rimini, having consumed €20,000 worth of cocaine in the last two weeks of his life.

More than any other sport, cycling in rooted in tales of heroic tragedy, and like the finest Italian opera, the Giro has always been one of the main stages.

Not everyone sees beyond the tragedy of Pantani, and there was evidence he was using EPO from 1995, only some people are perfectly happy to forgive, no matter what their age.

It’s all part of the love affair.

Fausto Coppi, who in 1949 became the first man to win the Giro and the Tour de France in the same year, juggled heroics and tragedy his whole life. Coppi is often credited for bringing modern “doping” methods into cycling, only in 1960, at age 40, he died after catching malaria on a hunting tour in Burkina Faso.

Around the same time his extra-marital affair ended up causing far more scandal than any allegations of doping, although eventually all of Italy seemed ready to forgive and forget, and voted him the most popular Italian sportsman of the 20th century.

The Giro can forgive too but doesn’t always forget. Whatever Chris Froome may have felt about his right to ride while awaiting the outcome of his positive test for excess levels of salbutamol, the climbs and punishment of this year’s race, on a course that appeared made for him, have instead broken him. So it appears an end to his quest to win four consecutive grand tours, a feat only ever achieved by Eddy Merckx.

Britain’s Simon Yates may still be sitting pretty in pink, but with today’s ride up Monte Zoncolon, widely considered the hardest climb in cycling, and three monster stages to come next week, including the dirt road ascent up the Colle delle Finetre, he’s still a long away from the steps of Rome on May 27th.

The Giro may lack some of the global appeal the Tour, but within the inner ring of the sport, it is considered the most beautiful of all three grand tours, and at times the most difficult.

“Where is the Giro of legend, where riders laughed and joked for five hours and raced for two?” asked Paul Kimmage, in Rough Ride, after “some Italian bastard attacked from the gun” on Stage 6 of the 1989 Giro, from Potenza over to Campobasso.

All of which makes Sam Bennett’s impact on this year’s race so impressive. At age 27, the apparent ease with which Bennett has made the podium six times in the opening 13 stages – including two outright stage wins – is actually in total contrast to the hard road he’s endured in getting this far.

His first triumph on Stage 7 into Praia a Mare, then his victory on Thursday in Imola, equals the two stage wins of Stephen Roche during his outright Giro win in 1987, and Bennett could easily have made it three on yesterday’s flat run into Nervesa della Battaglia, taking second spot.

There’s another tight connection with Martin Earley, who won Stage 14 of the 1986 Giro in Sauze d’Oulx, and the original pioneer Shay Elliott, who won Stage 18 of the 1960 Giro, into Belluno. And for Bennett, it also comes 30 years after one of his first mentors Sean Kelly took two stage wins during his outright victory at the 1988 Vuelta a España.

It was Kelly who helped send Bennett down this path, not long after he first joined up with Carrick Wheelers cycling club. His parents possibly thought he’d play soccer, certainly his father Michael, who played professionally with Eendracht Wervik in Belgium, where Bennett was born and lived until age four, before the family returned home to Waterford.

By age 18 his sprinting power was perfectly evident when Bennett won Stage 7 of the 2009 Rás, the youngest ever stage winner, then came the inevitable crashes, physical and mental.

He rode through illness and injury in the 2015 Tour, before abandoning on Stage 17, and a year later crashed, effectively riding on one hand until finish in Paris, bringing the lantern rouge over the line as the last finisher.

More than any other cycling race the Giro finds a way for some heroics, and given where Bennett has come from, looks capable of going, this may only be the start of the love affair.