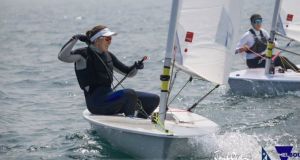 Olympic silver medallist Annalise Murphy marked her return to the Laser Radial with some reliable performances at the Australian National Championships in Melbourne this week.

After a four-year hiatus that included a 2018 Volvo Ocean Race campaign followed by a failed one-year 49erFX bid, Murphy jumped back into the single-hander to finish 12th in a mixed 63-boat gold fleet, counting a race win on her scoresheet. And perhaps in a sign of things to come in March’s Olympic trials, the 29-year-old also put plenty of blue water between her and the three other triallists for the Irish Radial berth.

The Australian Open title came down to a battle between two Dutch women. Maxime Yonker led the fleet after 10 races but her teammate (and Murphy’s arch-rival) Rio 2016 gold and London 2012 silver medallist Marit Bouwmeester won the final round to take the championships.

How Murphy might take on Bouwmeester again and break back into the top three internationally will no doubt be giving her pause for thought with just under 200 days to the Olympic Regatta itself. But, for now, the National Yacht Club helmswoman will be more than satisfied with the opening salvo of her second Tokyo campaign, mainly as her scoresheet contained two races where she did not even compete.

Conditions were testing, with strong 18-25 knot south-westerlies kicking up some choppy waves.

Admittedly, this is only the Australian championships, but it was well attended and, in a similar time frame out from Rio four years ago, Murphy failed to make the gold fleet at the 2016 world championships that April, so it marks something of an auspicious return for the silver medal winner.

As the only Irish boat qualified for Tokyo, the Radial will be the subject of a four-way trial starting in two months. Hopkins is back for another tilt having lost to Murphy in 2016, along with Irish Radial champion Keller, who secured the nation berth last summer at the World Championships in Japan. Significantly, both have been engaged in full-time campaigns and are now World championship gold fleet finishers; and that’s a step up in standard that both Murphy and McMahon must confront.

The combined scores from each of the following regattas will be used to decide the Irish nomination: Palma (March 28th-April 4th) Genoa World Cup Round and final European Nation Qualifier (April 13th-19th) and, lastly, Hyères Regatta (April 25th-May 2nd).

The Royal Cork Yacht Club is the new Mitsubishi Motors Sailing Club of the Year, both in honour of its tricentenary in 2020, and in celebration of a busy and successful season in 2019. The Cork Harbour club recently hosted the World Forum of the International Council of Yacht Clubs under its admiral, Pat Farnan.