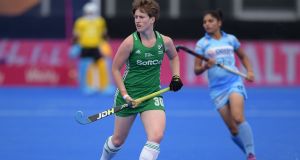 Ireland’s Ali Meeke will be part of the Ireland squad for the European Indoor Champsionships. Photo: Joe Toth/Inpho

World Cup silver medallist Ali Meeke will be one of the faces in the Irish women’s team which takes to the indoor arena in two weeks time. Having been involved in a series in South Africa last month, Division Three of the European Championships is Ireland’s first competitive dip into the indoor version of the game in over 20 years.

Loreto’s Meeke, who was part of the triumphant team that made it to the final of the World Cup in London in 2018 but was controversially left out of the squad that recently qualified for this year’s Olympic Games in Tokyo, is part of the indoor selection along with Catholic Institute’s Naomi Carroll, who has recovered from a cruciate injury. Carroll, like Meeke, is hoping to break back into the outdoor squad for Tokyo.

Ireland take part in the Indoor event in Bratislava on January 24th and play two games a day for the first three days with the top two earning promotion. They face Portugal and favourites Spain on day one followed by hosts Slovakia and Denmark before finishing with Finland and Slovenia. It reads like Spain will come out on top and it is all about who can win the second place.

There have been some issues getting the entire Irish squad together with a few of the players including former Ards and currently East Grinstead’s Chloe Brown not able to make it back to Ireland. The vice-captain has, however played indoors with her club.

Leinster players, who make up five of the 12-woman travelling squad, have been playing in an extended indoor league this season with Ulster players continuing with the outdoor game. In that respect it’s difficult to know where Ireland stands in terms of their level.

“We’ve had the advantage of playing South Africa but they are different to the European style,” said Passmore. “We’ve trained trying to replicate what we might face but it has been difficult to prepare. It is very much unknown. Some of the teams don’t play so much outdoors so indoors is their game. Spain have re-entered so we probably have to make sure we are the best of the rest.”