Claressa Shields: The US answer to Katie Taylor with a very different image 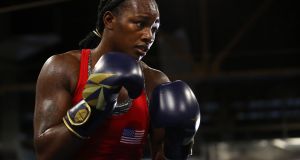 Claressa Shields: “I’m getting judged because I’m from Flint, Michigan and I’m one of the baddest motherf**kers out there.” Photograph: Gregory Shamus/Getty Images

Twenty-four hours before they were scheduled to fight for the vacant WBC and WBO junior middleweight belts last October, Claressa Shields and Ivana Habazin came face to face at the Dort Federal Event Center in Flint, Michigan.

After months of name-calling by both camps, the weigh-in hadn’t even formally started when the trouble began. Habazin’s trainer, James Ali Bashir, got into a verbal altercation onstage with Shields’ lesbian sister, shouting, “You ain’t no f**king man! You’re still a woman. I’ll slap your ass into the wall.”

Those verbals were caught on camera but no footage exists of what happened moments later in the lobby of the building. Eyewitnesses claim Ali Bashir was sucker-punched from behind and the 68-year-old had to be rushed to hospital for emergency surgery on broken bones in his face.

Shields’ brother, Artis Mack, a 28-year-old parolee with a lengthy rap sheet, was later arrested and charged with one count of assault with intent to do great bodily harm. The fight, which was supposed to be the main event on Showtime TV the following night, was cancelled even as Shields argued ludicrously on social media that it should still go ahead.

The two women meet finally, belatedly, on Friday night at the Ocean Casino Resort in Atlantic City where Shields, with a perfect jotter of nine wins from nine, will try to become the fastest boxer in history, male or female, to win world titles in three different divisions.

Even if she’s expected to defeat the over-matched Habazin, the storyline about her entering the record books is almost secondary to her ongoing attempt to rehabilitate a public image tarnished in the fall-out from the attack on Ali Bashir, and her initial classless response to the incident.

More than three years after her pro debut, Shields was supposed to be the face of distaff boxing in America by now. Their Katie Taylor. A pioneer in the same mould but, eh, very different. Taylor’s manager has never had to advise her to stop dropping f-bombs on Snapchat and witness Shields’ explanation of how she ended it with her first white boyfriend.

“I told him, ‘You know what, marshmallow, it’s time for me to go back to my chocolate.”

The first American woman to win Olympic gold in 2012 at the age of just 17. The first American boxer to retain Olympic gold in 2016. The first female to headline a televised card over here. Throw in a back story which has seen her overcome tremendous obstacles, an entertaining willingness to speak her mind, and she seemed just the character to usher the women’s game from the fringes to the mainstream.

Hailing from Flint, once a hub for General Motors, now famously one of those towns that post-industrial America conveniently forgot, a place whose citizens have not been able to drink tap water for years due to lead poisoning in the pipes, she grew up in the maw of poverty.

Her mother was an alcoholic and, between stays in prison, her drug-dealing father parlayed a promising amateur career into a stint as a bareknuckle brawler in underground fight clubs.

Claressa didn’t speak until the age of five and soon after that was effectively charged with baby-sitting her younger siblings on a daily basis, a role that included foraging for food for them wherever she could.

Sexually abused by one of her mother’s boyfriends, bullied in school for having frizzy hair, she took up boxing at 11 and, after bringing home Olympic gold before she’d even graduated high school, one of her first moves was to pay off her struggling mother’s overdue bills.

Unlike other Americans who won glory in London in 2012, however, Shields never garnered lucrative endorsement deals and, during the build-up to Rio, she butted heads with Billy Walsh, the Irishman by then in charge of Team USA’s Olympic programme.

She didn’t want to listen when the man from Wexford tried to convince her she needed to adapt and improve because what secured gold in London was not going to be enough second time around. For a time, it seemed only one of them could survive the squabble but, eventually, the pair got on the same page and, after the medal was hung around her neck, Shields texted Walsh, “Thanks Coach Billy, there’s a few things I did learn off you in the end!”

Pain, suffering, redemption, glory, the script of her life is straight out of Hollywood and a movie is in the works. Yet, curiously, she remains largely unknown and unappreciated outside the boxing community, so much so she has talked recently about crossing over into UFC, an outfit that does do a much better job promoting its athletes inside and outside the octagon. Ronda Rousey, for instance, enjoyed far more fame, recognition and riches for achieving way less than Shields.

This may be because the 24-year-old’s brand of dominance hasn’t included spectacular highlight-friendly knockouts, and she has, so far, also failed to find a challenger capable of becoming a true rival. Of course, there could also be something else at play.