Cycling: Bennett eager to chalk up some early success in Australia 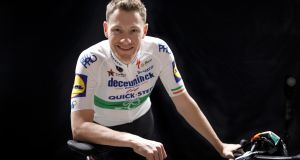 Sam Bennett shows off the Irish champion’s jersey he will wear in 2020 as part of the Deceuninck-QuickStep squad. Photograph: Shane Stokes

Fine-tuning his form in Australia in advance of his first race of the season, Sam Bennett has told the Irish Times that registering a strong performance early on is an important goal for 2020.

Bennett moved to the Deceuninck-QuickStep squad over the winter and will begin racing with the Belgian team in the Schwalbe Classic in Adelaide on Sunday, January 19th.

That event precedes the Santos Tour Down Under, which runs from January 21st to January 26th. Both of those should offer him opportunities, as will the Race Torquay event on January 30th and the Cadel Evans Great Ocean Road Race on February 2nd.

The Carrick-on-Suir rider began his season in Australia in 2017 and 2018. The first of those two years brought the best result, with victory in the People’s Choice Classic. That has since been renamed the Schwalbe Classic and will again mark the first race on his programme. He was also third on the opening stage of the Santos Tour Down Under.

The following year, his early season build-up was affected by a cold and his best result was 14th in the People’s Choice Classic.

The Irish road race champion’s race kit was officially unveiled on January 1st. His team change plus the sport’s rules made it impossible for him to display his customised white and green jersey before then.

Bennett has a two-year contract with Deceuninck-QuickStep and said it was very important for him to clock up as much success as possible during that period.

“I am not getting any younger,” he said recently. “I am 30 at the end of next season. And as a sprinter, you start to slow down at some point. So I really need to try to take everything I can now.”

Meanwhile the 2018 Irish road race champion Conor Dunne has announced his retirement. He competed in 2019 with the Israel Cycling Academy team, but its merger with the Katusha team squeezed him out. He was unable to find a new squad.

“Racing bikes was an adventure I’ll never forget, that I shared with so many incredible people,” he said in a social media post this week. “It’s hard to say goodbye to something that has motivated/driven me for so long but now felt like the right time to put my energy into a new challenge. I’m so excited about what comes next.

He said t he was proud of what he was able to do in the sport.

“Most of the time I got an absolute kicking but every now and then I managed to win the odd race with myself and I feel I always gave all I had in the process. However it wasn’t the races or results that I’ll look back on, but it’s the people, places, experiences that will stay with me.”

Dunne is the partner of Stacey Kelly, daughter of Sean Kelly, and recently became a father. He indicated this gave him the most satisfaction.

“Without cycling, I’d have never bumped into the most amazing girl I’ve ever met in my life and for this I’ll be eternally grateful above all else.”