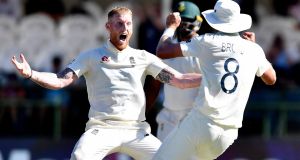 Ben Stokes had a very satisfactory 2019. Well, 2020 has not started too badly either. With the shadows lengthening under Table Mountain on the fifth evening of a memorable match it was, inevitably, Stokes who sealed a famous England victory by 189 runs. He was the man to snatch the last three wickets just when it seemed that a determined South Africa side might hang on for a draw.

Hard-fought victories are the most satisfying and England had to toil for 137.4 overs for this one. They were hampered by an injury to Jimmy Anderson, a pitch that stubbornly declined to deteriorate under a hot sun and some gutsy batting from the home side. With 12 overs remaining South Africa were 241 for seven and Stokes had a ball that was 54 overs old in his hand as he ran in from the Wynberg End. Throughout an arduous day England had eked out five batsmen but Dwaine Pretorius and Vernon Philander, the batsmen at the crease, were capable obstacles.

But Stokes has a habit of ignoring conventional hurdles. In he charged for one final spell propelling that old ball at 90 mph. Once again he would not be denied. He beat the bat of Pretorius several times; he snorted and glared down the pitch to indicate he was going to prevail in the end. When Philander rejected a single at the end of an over from Dom Bess, Pretorius was still exposed. In came Stokes again, for an edge and a diving catch from Joe Root on a day when England seized every chance that came their way and the game had turned yet again.

Next came Anrich Nortje, the nightwatchman of Centurion. In steamed Stokes, another edge flew into the slip cordon where Zak Crawley parried the ball with his right hand before falling to the ground to catch it calmly with his left. Kasigo Rabada negotiated the hat-trick ball but England only had to wait another four overs for the final wicket, that of Philander. At last the surface offered some help as Stokes ran in once more; this time the ball popped and was sliced to Bess in the gully. One-all in the series and so much to play for, so much to anticipate as England conjured their first overseas victory since the Test in St Lucia and their best for much longer than that.

It always felt that this would be a long day, in which patience would be required, even though the nightwatchman, Keshav Maharaj, did not dally long. In the third over he was struck on the pads by a straight delivery from Anderson and so became the first batsman of the match to be lbw. Correctly, Maharaj did not consider a review for very long before setting off for the pavilion.

Faf du Plessis has yet to fire in this series; here he occupied 18 overs without too much bother before a rare attacking shot caused his demise. From outside off-stump he swept at an off-break from Bess and middled the ball straight to Joe Denly at square leg. Even though this was not a classic dismissal it was no more than Bess deserved, if only for his perseverance. He would bowl very respectably all day but the pitch was bland; the ball would only really turn out of the rough and when the right-handers were on strike the bowlers’ footmarks were out of play. His rewards in this match have been slim but he has bowled better than we had any right to expect given his lack of preparation.

Root took the new ball just before lunch. Anderson bowled one over with it but did not resume after the break. He was a spectator all afternoon, sometimes from the pavilion as it became apparent that something was wrong. It later transpired he has a problem with his side, a nightmare injury for a fast bowler. After tea he would bowl two more overs but it was soon evident he was struggling.

In that afternoon session just one wicket fell, that of Pieter Malan, who batted over six hours for his 84. He was surprised by the extra bounce extracted by Sam Curran and the edge, as ever, was held by the alert Stokes at second slip. Malan had relished batting on his home ground. There was barely an indiscretion during his 288-ball innings and there was no disgrace in the way he played his final delivery.

So Malan has proved quite a find, even though he has been around for a decade at domestic level. His judgment of what to leave was impeccable, his technique sound and his concentration sure. Here was the virtue of having a 30-year-old debutant; he clearly knows his game inside out. Rassie van der Dussen, another 30-year-old whose first game was at Centurion, is in the same category. He smelt the ball in defence and was not bothered about scoring runs.

Quinton de Kock naturally scores more freely and he proceeded without too many alarms to his half-century. Sometimes he was inconvenienced by Denly’s leg-breaks when they pitched in the footmarks outside his off-stump. However the leg-break that dismissed him did not land in the rough; it was far too short for that. De Kock sensed more runs but his pull shot was poorly executed. He hit the ball quite hard but straight towards mid-wicket and Crawley, who held a fine catch above his head.

Then came a little moment of magic. Stuart Broad was trying some leg-cutters, most of which were met with the dead bat of Van der Dussen. Someone decided – and in these circumstances the captain must take the credit – that Anderson should move from silly mid-on to leg slip, a position rarely employed in the modern game. Next ball, Broad propelled a delivery just outside leg-stump; the batsman instinctively glanced and the ball sped straight into the hands of Anderson. A stroke of genius or luck? We’ll await the Broad version. This opened the way for the grandstand finish, which has, of course, become Stokes’ speciality. – Guardian