Athletes set to sleep on cardboard beds at 2020 Olympics

Around 18,000 beds will be required at Olympic village for Games next summer 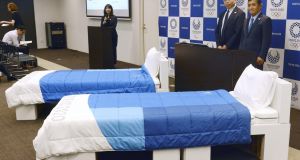 The 2020 Tokyo Olympics and Paralympics organising committee and Japanese mattress maker Airweave Inc. unveil beds and bedding items to be used at the athletes village for the summer games. Photo: Kyodo News via Getty Images

Athletes competing at the Tokyo 2020 Olympic and Paralympic Games will sleep on bed frames made from recyclable cardboard, with mattresses formed of polyethylene materials that will be reused for plastic products after the Games.

The environmentally conscious sleeping arrangements were put on display for the media for the first time on Thursday at a mock apartment in the Tokyo 2020 headquarters, though construction of residential sections of the Olympic and Paralympic village were completed in December.

In all, 18,000 beds will be required at the village, nestled in Tokyo Bay and in sight of the iconic Rainbow Bridge, during the Olympics that begin on July 24th. Only 8,000 will be needed for the Paralympics.

At 2.10 metres long, the beds should be suitable for all but the very tallest athletes, and the manufacturer, Airweave, is confident they can bear a weight of around 200 kilograms, which is more than any athlete weighed at the 2016 Games in Rio.

Construction of some communal areas of the Olympic village, like the main dining hall and the village plaza, is still underway. After the Games, its apartment units will be sold privately, with prices starting from a little over 50 million yen (€411,176).

The organisers are making a concerted effort to reduce carbon emissions generated by the Games, according to Junichi Fujino, an environmental researcher on the city’s taskforce.

All medals will be made from metal extracted from recycled consumer electronics, including about 6.2 million used mobile phones. The Olympic torch is made from aluminium waste, and the podiums from recycled household and marine plastic waste. Electricity for the Games will come from renewable sources.

Politicians and athletes should keep politics out of this year’s Tokyo Olympic Games to protect the event’s neutrality and its status as a peaceful meeting place, International Olympic Committee President Thomas Bach said on Thursday.

The Games have seen both political protests by athletes in the past as well as boycotts of nations and Bach said any infusion of politics into the Games in Tokyo starting on July 24th would not be welcome.

Tensions between the United States and Iran have risen sharply in recent days prompting major concerns across the world, while South Korea has said there is an urgent need to improve ties with North Korea.

China, Japan and South Korea recently agreed to work together to promote dialogue between the United States and reclusive North Korea.

“The mission of the Olympics is to unite and not to divide. We are the only event in the world that gets the entire world together in a peaceful competition,” Bach told reporters after a meeting with the IOC athletes’ commission chief Kirsty Coventry.

“I ask them (politicians and athletes) to respect this mission of the Olympic Games and in order to accomplish this mission we must be politically neutral.

“Otherwise we would end up in this divisive and boycott situation. I ask them to respect this political neutrality by not using them (the Olympics) as a stage for their political purposes.”

“The boycotts we had particularly in the 1980s with Moscow and the counter-boycott in Los Angeles which brought the Games to the brink of demise... had no effect whatsoever.

“Sport was a kind of a scapegoat because all the other political divisions were not affected. The Moscow boycott did not change anything in Afghanistan at the time and the counter-boycott in 1984 did nothing to change politically the United States or the foreign policy in the US.”

More recently, at the Rio de Janeiro 2016 Olympics, Egyptian judoka Islam El Shehaby was sent home after refusing to shake the hand of Israeli Or Sasson after their bout.

In October 2019 Iran’s judokas were banned indefinitely from international competitions until it could provide strong guarantees that its athletes would be allowed to face Israelis.

The ban followed a protective suspension imposed on the Iran Judo Federation in September 2019 for putting pressure on one of its fighters to withdraw from the world judo championships to avoid having to face an Israeli opponent.