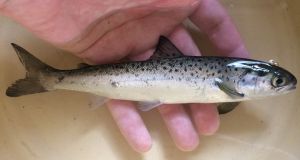 The new findings on the migration of salmon smolts came after researchers tagged smolts with acoustic tags in the Castletown and Boyne rivers in spring 2019.

New research has revealed salmon smolts leaving the east coast of Ireland travel northwards to leave the Irish Sea, rather than south to join their counterparts on the western coast. This new evidence was established after researchers tagged smolts with coded transmitting acoustic tags in the Castletown and Boyne rivers in Co Louth during the spring of 2019.

Three of these tagged salmon were picked up on listening devices in the coastal seas as they travelled northwards out of the Irish Sea towards the Atlantic.

One of the smolts was recorded in Scottish waters, some 80km north of the Inishowen peninsula. This smolt had travelled an estimated 250km in just over a month, one of the longest distances recorded for a salmon tracked at sea en route to its feeding grounds in the North Atlantic.

Two more salmon smolts were tracked off the Northern Ireland coast, further confirming the northward migration of the fish through the Irish Sea.

The study was carried out as part of the Compass project funded by the European Regional Development Fund’s Interreg VA programme.

Until now, it was unknown if juvenile salmon leaving Ireland’s east coast rivers headed around the north or south coasts to get to their oceanic feeding grounds. These salmon also moved offshore quickly, behaving very differently from sea trout, which remained closer to their spawning rivers.

The tagging programme was carried out by Inland Fisheries Ireland’s (IFI), Dr James Barry and the Agri-Food and Biosciences Institute’s Dr Richard Kennedy, who tagged and analysed the movements of 130 smolts as they left their rivers of birth in the spring of 2019.

The local Dundalk and District Brown Trout and Salmon Anglers helped to install fish traps, and a network of acoustic receivers were moored to the sea bed from Drogheda to the north east coast to track the acoustic transmitters in the salmon.

Commenting on the findings, Dr Roche, senior research officer at IFI, said: “As salmon populations are in decline across the northern hemisphere, we urgently need to establish their migration journey and identify any issues which may be negatively impacting survival along that route. This research marks an exciting milestone and it will play a critical role in supporting marine conservation efforts.”

To find out more about this research and the Compass project, see compass-oceanscience.eu.

It was a very long journey but most enjoyable and we are proud to have represented our country on the world angling stage,” according to Trout Angling Federation of Ireland team captain Stuart McGrane, following Ireland’s participation in the FIPS-Mouche world championships in Tasmania, last month.

The team of five plus captain and manager Frank Dempsey, travelled from Dublin to Dubai, then to Melbourne and on to Tasmania, a journey of 23 hours in total, for the brown trout fly fishing championships held on three lakes and two rivers.

At time of writing we still await the first salmon of the new angling season. Traditionally, the river Drowes in the northern region achieved this honour on opening day (January 1st) with the Liffey less fortunate because of initial closure, and now catch and release on the lower section, resulting in less angling pressure. According to Drowes proprietor Shane Gallagher, the fishery yielded three kelts and one fish lost.

It was a similar story at Islandbridge on the Liffey. The dawn gathering of Dublin Salmon Anglers’ Association members for New Year celebrations saw a few anglers wet a line but to no avail.

However, this did little to dampen their spirit and Wednesday was greeted with plenty of food and chat (and the odd tipple from the nearby world famous brewery) to brighten an otherwise dismal day.

On a brighter note, more than 100 salmon passed through the counter at Islandbridge over the past month, including 10 during Christmas week, according to a reliable source.