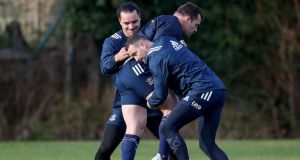 The Champions Cup pool stages reach a conclusion this weekend, with Leinster bidding to make it six wins from six and secure a top-two seeding when they travel to play Benetton Treviso in Italy tomorrow afternoon (kick-off 1pm). Leo Cullen’s side are unbeaten in 15 fixtures so far this season and Kiwi winger James Lowe has been at the heart of that effort - he’s played the full 80 minutes in 10 of the province’s fixtures. However the 27-year-old, who qualifies to play for Ireland next year, isn’t taking anything for granted as his side look to end their pool campaign in style: “I’m enjoying my rugby at the moment,” he said. “If I get picked, then I want to perform, I want to play 80. I’ve been very lucky to have gone this far without any serious niggles or things that have kept me out of games . . . I like my time off as well. I’m not going to lie. I like a beer like everyone else.” Meanwhile Munster prop Dave Kilcoyne has lamented his side’s poor run of results which has left the province on the brink of a European exit this weekend: “Two [wins] out of eight isn’t good, it’s not acceptable. We have to find solutions now.” Leinster, Ulster, Munster and Connacht will all name their sides for this weekend’s Champions Cup fixtures at 12pm today.

Elsewhere Ballyhale Shamrocks and TJ Reid are set for tomorrow’s final against Tipperary’s Borris-Ileigh in Croke Park, with the Kilkenny star bidding to secure a fifth All-Ireland SHC club medal to go alongside the seven he has won for his county. 32-year-old Reid is into his 16th season, having made his Ballyhale senior debut as a goalkeeper aged 14. What is the secret to his longevity? “But look, it’s all about freshness, enjoying the process,” he said. “And over the last years, research shows that recovering is better than being in the gym flogging yourself. I have that understanding of training and I can implement that on a daily basis, with my job is as a director of a health and fitness centre, I know how to keep myself in check, keep fresh.”