Andy Dufresne gets the better of Captain Guinness in Punchestown feature 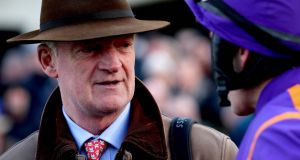 Willie Mullins has been a notable exception among Ireland’s top trainers in not having a sponsorship deal with a bookmaker. Photograph: Inpho

Willie Mullins has described the Irish Horseracing Regulatory Board as being “a bit late coming to the party” on the back of the integrity body’s stated unease about bookmakers sponsoring trainers and jockeys.

The IHRB revealed its concerns over public perception of such sponsorship links last week when a spokesman outlined how it “doesn’t sit comfortably with us.”

The issue returned to prominence in Britain last week when top trainer Nicky Henderson revealed details of his plans to scratch top chaser Altior from a weekend engagement through a blog released by his sponsor, Unibet. It has prompted wide-ranging debate once again over whether the sport’s integrity is compromised by sponsorship deals between bookmakers and trainers and jockeys.

Some of Irish racing’s best known figures have commercial deals with gambling firms. Gordon Elliott and Joseph O’Brien perform high-profile “ambassadorial” roles for Betfair. Jessica Harrington is another leading Irish trainer with a betting firm link, in her case with Unibet.

The Irish Jockeys Association has insisted arrangements between gambling firms and riders, such as Robbie Power’s link with Boylesports, don’t constitute sponsorship but are instead an “ambassadorial” function.

Willie Mullins has been a notable exception among Ireland’s top trainers in not having a sponsorship deal with a bookmaker. “I have been approached by different bookmaking firms. I’ve always said no. I wouldn’t be happy with it,” the champion trainer said at Punchestown on Sunday.

Asked why not, Mullins replied: “Obvious reasons. It’s a lovely cash cow for a lot of people and I’m not going to stop it. But I’ve never been comfortable with it and that’s why I didn’t do it,” he added.

Mullins is a former chairman of the Irish Racehorse Trainers Association, the body awaiting proposals from the IHRB in relation to potential greater regulation of commercial links between bookmakers and license holders.

When possible moves on the contentious issue by the IHRB were pointed out to Mullins on Sunday he commented: “They’re a bit late coming to the party, aren’t they?”

On Sunday’s card Mullins’s Carefully Selected was cut to 9-2 favourite for the long-distance National Hunt Chase at Cheltenham after making it two from two over fences in the Grade Three Killiney Chase. Paul Townend’s mount made all and the 4-7 favourite looked a likely winner anyway when Speak Easy took a crashing fall at the last.

“The way he jumped there I would think the National Hunt Chase would look to be right up his street but we’ll keep the RSA open too. I’d like to get another run into him before Cheltenham,” Mullins said.

Andy Dufresne resumed winning ways in the Grade Two Sky Bet Moscow Flyer Novice Hurdle but the 8-15 favourite had to fight hard with Captain Guinness to win by three parts of a length. The latter was keen in the early stages and Rachael Blackmore allowed him go to the front before halfway.

Considering how free he was Captain Guinness did well to stay on so well on just his second career start and both the first two earned Cheltenham quotes for the Supreme Novices Hurdle. “Rachael made it a good test out in front and I’d say he’s not a bad horse either,” reported Andy Dufresne’s jockey Mark Walsh.

“Andy Dufresne was beaten by a better horse last time and there were no excuses. He has the option of going two and a half now and there won’t be a rush to decide that. He’s very slick, a good jumper for a big horse,” he added.

Blackmore got compensation later as Le Musigny pounced late to land a maiden hurdle where the disappointing odds-on favourite Blackbow faded to fourth.

The decision by point to point racing’s most successful jockey Derek O’Connor to ride at Punchestown didn’t pay off on City Island but he did score on Rocky’s Silver in the amateur riders handicap chase.