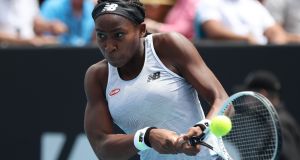 Coco Gauff will play against Venus Williams in the first round of the Australian Open. Photograph: Getty Images

Coco Gauff was sensationally drawn against Venus Williams again in the first round of the Australian Open.

It was victory over Williams for then 14-year-old qualifier Gauff at the same stage of Wimbledon that catapulted the American teenager to global stardom.

Gauff, now 15, has built on her breakthrough brilliantly, winning her first WTA tournament at the end of last year to break into the top 100 and earn direct entry to the draw in Melbourne.

Defending champion Naomi Osaka opens against Marie Bouzkova and top seed Ashleigh Barty, on whom much of Australia’s focus will be, takes on Lesia Tsurenko.

Defending men’s champion Novak Djokovic opens against dangerous German Jan-Lennard Struff while Roger Federer, who is in the same half as the Serbian, meets American Steve Johnson.

At the top of the draw, number one seed Rafael Nadal will face Bolivia’s Hugo Dellien.

Nick Kyrgios, promoted to Australian number one following the withdrawal of Alex De Minaur, could be a fourth-round opponent for Nadal, who is scheduled to meet his US Open final opponent Daniil Medvedev in the last four.