TJ Reid reveals the fresh secrets of his consistency 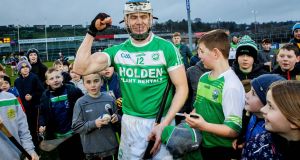 TJ Reid celebrates Ballyhale’s victory over Slaughtneil in the All-Ireland semi-final. “Things are going very well for me at the moment, that allows me to be very consistent . . . I can concentrate on my hurling and the stuff I do outside of hurling.” Photograph: Ryan Byrne/Inpho

Sixteen has turned 32, and in retracing the rise and consistency of TJ Reid it seems there is no such thing as a step back. Only 16 seasons still fast rolling into one.

Looking impeccably fit and forever young, Reid was in Croke Park this week talking up Sunday’s AIB All-Ireland club hurling final, seeking a fifth title with Ballyhale Shamrocks to go with the seven All-Irelands he has also won with Kilkenny.

In between he’s also won seven county and six Leinster club titles, four Allianz Hurling League titles, and eight Leinster hurling titles. And he recently won his fourth All Star. You do the math.

It means he’s hardly had a break since 2004 when at age 16, helped by a sudden growth spurt, Reid made his first senior start for Ballyhale, in goal: soon suitably moved outfield, he’d already won his first All-Ireland with Ballyhale by 2007, still a teenager, and by 2008 was already a regular senior with Kilkenny.

If there is any secret to his longevity and consistency – especially the typically double-digit scoring per game – it’s his own telling of it.

“Not getting any younger,” he begins. “But look, it’s all about freshness, enjoying the process. And I suppose when you’re enjoying life and you have no negativity in your life. In terms of work commitments, family, fiancé – everything is going very well.

“And over the last years, research shows that recovering is better than being in the gym flogging yourself. I have that understanding of training and I can implement that on a daily basis, with my job is as a director of a health and fitness centre, I know how to keep myself in check, keep fresh.”

That job being TJ Reid Health and Fitness in Kilkenny (recently expanded with a new gym in Salthill), his fiancé being Niamh de Brún, with marriage plans for later this year, and in keeping himself “fresh” Reid also points to the fact he’s never let himself go.

“I was always into strength and conditioning and nutrition anyway. My intention in starting my own business wasn’t to prolong my career, but it definitely helps. Obviously if you have a match on a Sunday and you’re in a car, driving six or seven hours in a day, it definitely does impact on your body.

“Now if I have a match on a Sunday, I have the benefit of doing a recovery session on a Saturday before starting into the jobs I have to do in the gym. I control everything I do at this moment in time. And business is going very well. But if things are on the down – and I’ve nine staff employed – if those people weren’t getting their wages, or if people weren’t coming through the doors, if rent wasn’t paid, well then my hurling would go to shit.

“So things are going very well for me at the moment, that allows me to be very consistent, I don’t have that headache. And then I can concentrate on my hurling and the stuff I do outside of hurling. I’m lucky in that I’m 32 and I have no injuries. I haven’t missed training due to a hamstring or anything like that.

“My genetics are decent, so that plays a massive role. I can picture Michael Fennelly, if he hadn’t the niggles, he’d still be a powerhouse for Kilkenny. But he just got the injuries, ankles and knee injuries. I look back on Michael Rice as well. He got to 32, did his cruciate, and that put him on the back burner as well. So injuries have a big impact on prolonging your career.”

There are fresh motivations too. Ballyhale may be the most successful club in hurling history with their seven All-Irelands, but Sunday marks the chance to win a first back-to-back. Reid also ended up top championship scorer in 2019, with his 5-83, only for Tipperary to claim the ultimate award. Borris-Ileigh, Sunday’s opposition, will be suitably motivated too.

There is also fresh evolution: “The three people going for Hurler of the Year were myself, Seamus Callanan and Patrick Horgan, all over 30, so I think that changes the age thing too. Clare and Cork played a young running game and everyone was saying ‘it’s a fast game now for young players’.

“Then Galway put that to bed. They won the All-Ireland in 2017 with a physical approach. They went back to the traditional way of winning your own ball up front and getting scores. And then again, Limerick changed that. They had the physicality but they also had the skill and developed a running game, alongside the work rate. So every year I think it evolves. That running game is kind of put to bed at the moment. It’s back to basics.”

Playing an All-Ireland final on the third Sunday in January is “hard to get the head around” and Reid still admits his preference for St Patrick’s Day: there is another fresh motivation too in trying to maintain Henry Shefflin’s unbeaten reign as Ballyhale manager.

“I live next door to Henry and when he came in, everyone in the whole panel were excited. He doesn’t even need to do anything. He’s Henry Shefflin. And you’ll go and give him 110 per cent because you know what he’ll give you.”