James Lowe relishing the work, rest and play of his Irish rugby adventure

Eligible to play for Ireland from next summer, the Leinster winger continues to impress 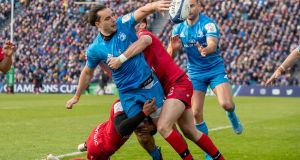 Leinster’s James Lowe offloads as he is tackled by Lyon’s Noa Nakaitaci and Xavier Mignot during the Heineken Champions Cup at the RDS. Photograph: Morgan Treacy/Inpho

James Lowe takes his seat, stares at his wrist and looks mildly perplexed.

“I actually lost my hair ties. They are normally on here,” he says pointing to his bare right arm. That’s not a very rugby thing to say. Who is in the frame for the robbery James, he is asked.

“So either Joe Tomane or my girlfriend is in a lot of trouble,” he warns. “I feel like Joe would do it on purpose. My girlfriend and I have a mutual relationship, where my hair ties are mine.”

Lowe’s sense of the absurd and freewheeling way of talking has won over many. It is not that he is unguarded but shapes conversations to be humorous and personal and in his Kiwi cultural milieu can say almost anything without much blow back.

He is the first and probably the last beneficiary of the residency rule who will say ‘if I look at it, it’s a stupid rule isn’t it.” The New Zealand born 27-year-old of Maori descent will be eligible to play for Andy Farrell in June.

Last year Lowe was asked about Johnny Sexton being regarded as one of the best outhalves in world rugby. His deadpan response was along the lines of ‘yeah Johnny will tell you that himself. He never stops talking about it.’

Since his arrival in Ireland three years ago this summer, it has always been about ‘say anything, say nothing’ chat, an Irish lifestyle “on the other side of the world” and playing excellent rugby.

When he first arrived he couldn’t, wouldn’t defend. Now he’s a human cannon ball. On the pitch he wants a piece of everything. That oversized willingness is what people see.

“It is awesome when you are winning. Coming to the end of 13 games on the trot and being unbeaten is lovely,” he says. It is 15 games but it’s endearing and more credible proof than all of the Leinster denials that they are not caught up in the current winning streak.

Leinster knows what value they have in their high-octane winger. Lowe has played for the full 80 minutes in 10 games so far this season and more recently helped Dave Kearney to two tries last time out against Lyon.

“Yeah, I haven’t got any back from him – from either of the Kearneys,” he quips bringing to three the number of players he has faux insulted.

The flip side is with Ireland on the horizon, he may not be putting in that size of shift next season. If Lowe can establish himself in Farrell’s thinking, his Leinster appearances will certainly be curtailed according to the player welfare programme.

Sexton has played 12 times for Leinster in each of the past two seasons and three times so far this season – against Northampton, Lyon and Benetton.

“I’m enjoying my rugby at the moment,” he says. “If I get picked, then I want to perform, I want to play 80. I’ve been very lucky to have gone this far without any serious niggles or things that have kept me out of games . . . I like my time off as well. I’m not going to lie. I like a beer like everyone else.

“I love the game of rugby. It has given me an awesome opportunity to call it a job and live on the other side of the world.  There are times when you need a rest and you get that.

“But, there are times when there are two, three, four stretches of games where you’ve got to dig in, you know. I don’t mind a couple of weeks off here and there.”

The players know a week out from the Six Nations, the national coaches are watching. The Italians are also hoping to impress a new coach Franco Smith following the departure of Conor O’Shea.

But fearfully for the pessimists, Benetton this weekend comes with a warning sign, the danger being first in Pool One against last, an Italian seduction and the unbeaten Leinster side offering a soft shoulder.

But Lowe sees it for what it is and it is not Leinster sweeping up the remnants of a group they have bullied from the beginning. It is about marginal gains as they go deeper into the tournament.

“It doesn’t matter what we have done before,” he says. “There is such a huge bearing on this game. If we win, then we get first, a home quarter and if we win that, a home semi. If we are able to win that, we get to pick the changing rooms [for the final].”

And the bands? They won’t hold anyway. By the end of the match his hair will make him look like he has been raised by sparrows in a hedge.