Have we just witnessed a new and more reflective side to Conor McGregor?

MMA star Conor McGregor says that he is "more grown, more experienced" ahead of his UFC comeback. Video: Reuters 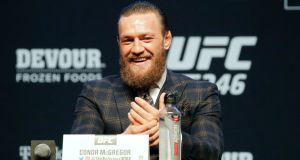 Conor McGregor during a press conference for UFC 246 in Las Vegas. Photograph: AP

Conor McGregor may have showcased a new and more reflective side to his personality at his press conference with Donald “Cowboy” Cerrone, but the Irishman still promised to knock the American out when the two meet in the UFC octagon in Las Vegas on Saturday.

Arriving on time for once in his career, the profane diatribes aimed at previous opponents were nowhere to be seen as McGregor took a different tack, speaking of his respect for his experienced opponent and how much he is looking forward to their welterweight bout.

“I’m in a position now where I’m just very, very excited to be here, and I’m very eager to perform for the fans on January 18th,” said McGregor, who savoured the applause of the crowd before taking his seat at in the Pearl Theatre at the Palms for the press conference.

“I’ve got a solid opponent in front of me, a veteran of the game, and I’m just in a good spot. That’s it. I don’t think I’ve changed or altered, I’m just committed and focused and happy to be here.”

The 15 months since McGregor lost his last UFC fight, a lightweight title bout loss to Khabib Nurmagomedov, have seen him engaged in several high-profile brushes with the law, but the 31-year-old repeated on numerous occasions that he is in a good place as he prepares for his first fight of 2020.

The only question directly related to McGregor’s legal difficulties saw Cerrone and UFC president Dana White leap to McGregor’s defence as the crowd booed and whistled the journalist who asked it.

Dressed in a suit from his own clothing line, McGregor complimented the 36-year-old Cerrone on his slick snakeskin jacket as the Colorado native tried to inject some fire into the proceedings.

“I hope you’re ready, ‘cos I’m coming,” Cerrone told McGregor, before turning his attention to the audience. “He knows it, and he’s coming. We’re going to blow the roof off this place, you don’t understand. I’m so excited for this fight.”

Though McGregor appeared to be on his best behaviour, he did let one stinging barb fly to break up the mutual back-slapping.

“I can read Donald, I like him a lot, he’s a good guy but I can read Donald like a children’s book, to be honest,” McGregor said, prompting laughter from both the crowd and Cerrone.

“He’s a good fighter, he’s got some good tricks up his sleeve, I know the tricks he has, and I know what he’s planning and what he hopes to achieve but we are well prepared and we’ll see on the night, it’s going to be a good night.”

Cerrone has more wins than any other UFC fighter in history, and though McGregor paid homage to his opponent’s past achievements, he still predicted he would end the 51st fight of Cerrone’s career by knocking him out.

“It’s hard not to respect Donald right now, at this stage. He has my respect, and although there will be blood spilled on January 18th, it will not be bad blood,” McGregor said.

The two meet in the main event of UFC 246 at the T-Mobile Arena in Las Vegas on Saturday.