Dave Kilcoyne and Munster eager to get back to winning ways 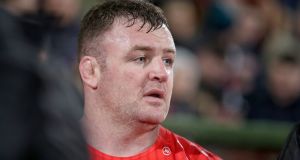 Long-serving Munster prop Dave Kilcoyne says a return of two wins from their last eight games is just not good enough for the province.

And while their Heineken Champions Cup fate is out of their hands at this stage, the 31-year-old said it is vital they finish their pool campaign on Sunday against Ospreys with a win.

“Two out of eight isn’t good, it’s not acceptable. We have to find solutions now. We did that in the review meeting. I suppose I try and look at performance probably more than results. You try and look at the process.

“We looked at the areas we need to be better in and we really need to target a big performance this weekend. Without sounding clichéd, it really is one for the fans, we got to show them just how much their support and the travelling support meant this weekend and show them how hungry we are to play for the province.

“I believe there are over 19,000 tickets sold for this weekend. That just shows the level of support and what Munster Rugby means to the local community here.

“I’m from Ballinacurra, I’m from Limerick and I came up wanting to play for Munster. You live and breathe it, you go to school here dreaming of playing for them. When you get involved in it, you see how much it means to your family and beyond that, the wider circle, so I don’t take any convincing of how important this weekend is.

He’s also mad keen to show Andy Farrell that he’s back to his best after missing out through a calf injury after the World Cup and not playing his first match of the season for Munster until they played Connacht four days before Christmas.

The return of Jack McGrath to the Ireland squad for the Six Nations cranks up the competition with Cian Healy for the loosehead spot, but Kilcoyne played in all five games at the World Cup and is raring to get back having brought his Irish caps up to 36 in Japan.

“I just got hampered after the World Cup with a calf injury so the loss at the weekend in Paris was my first European game back this year.

“We’re frustrated with the loss the weekend, but you have to dust yourself off quickly and get ready for a very hungry Ospreys side coming to Thomond Park on Sunday looking for a scalp.”

He said he’s revelled in working with new forwards coach Graham Rowntree and he reckons the former English prop has gone native at this stage.

“I am working on a daily basis with Wig [Rowntree] who I can only say, he is such a Munster man, he won’t mind me saying that, he has been an incredible signing.

“If you meet him here he is just a ball of energy, he lifts the place when he comes into a room, everyone just lifts around him, he is exactly what Munster needed.

“He is like a born and bred Munster man. He comes from that tough, old school kind of thing, I hope he doesn’t mind me saying this, but he is incredibly positive, he is incredibly knowledgeable about the game.

“He has brought on my game loads, he has brought on loads of lads games loads. He sits down and goes through everything with us, one on ones,” added Kilcoyne, who has now chalked up 181 appearances for Munster.

Willie Mullins prefers to ‘keep it simple’ and run Benie in Mares Hurdle 06:00
Stopping Jonny May’s pace must be high in Ireland’s priorities 06:00
Monaghan and Mayo face off with relegation a real prospect 06:00
Should fans be allowed drink in the stand at sporting events? 06:00
Gerry Thornley: England primed to show their best against Ireland 06:00
Here is your handy guide to sport on television this week