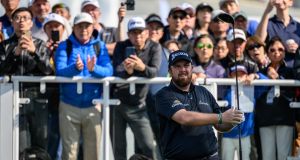 Ireland’s Shane Lowry tees off during the final round of the Hong Kong Open on Sunday. Photograph: Philip Fong/AFP via Getty Images

Heavy rainfall, of all things, has served as a precursor to this week’s European Tour stop, the Abu Dhabi HSBC Championship in the desert. But the sun is due to return for the tournament itself, when Shane Lowry – one of two Irish players in the field, along with Pádraig Harrington – will seek to successfully defend a title for the first time in his career.

Lowry shook off the winter cobwebs with a week’s practice in Dubai recently and showcased the wellbeing of his game in hitting the ground running with a runners-up finish in the Hong Kong Open, the first of a four-week run of events that now moves on to Abu Dhabi followed by next week’s Dubai Desert Classic and then Saudi Arabia.

With world number one Brooks Koepka returning to competitive duty in Abu Dhabi for the first time since re-aggravating his knee injury in a fall during his defence of the CJ Cup in South Korea last October, it means that Lowry won’t be the centre of attention in the Rolex series event, although his form in Hong Kong left him “very happy with myself”.

The victory in Abu Dhabi a year ago played “a massive role” in Lowry’s subsequent breakthrough Major win in the 148th Open at Royal Portrush in July. Of that overdue success which kickstarted a season to remember, Lowry recalled: “I hadn’t won [on tour] since 2015, so it was an important week to remind me that I have everything it takes to win a tournament. It reinstalled the belief and confidence that I had what it takes to win against the world’s best players, which was pretty useful for Open week. Going through that sort of experience was invaluable, as was getting back in the winner’s circle.”

Only two players, Tommy Fleetwood and Martin Kaymer, have successfully defended the Abu Dhabi Championship since it first appeared on the European Tour 15 years ago. “I’ve actually never successfully defended a professional title before so I’m not sure if I know the answer to what the secret is to retaining the trophy,” said Lowry.

In terms of world ranking points, the Abu Dhabi Championship is ranked significantly stronger than the competing PGA Tour event, the American Express at La Quinta in California: 52 points for the winner compared to 40. Ironically, the presence of a number of high-ranked Americans – headed by world number one Koepka along with Patrick Cantlay and Bryson DeChambeau – has greatly aided the European Tour sanctioned event.

Koepka’s return to competition for the first time since October adds some further level of interest, following on from his rehab and undergoing a stem cell procedure to repair a partially torn patella tendon in his left knee. The player’s agent Blake Smith claimed Koepka had met “all of his physical therapy goals” and was “excited” about getting back to playing.

Harrington earns his place in the field for the big-money event thanks to his “Legends” category on the European Tour, but Cormac Sharvin – who secured his tour card through the Challenge Tour last season – failed to get in and was seventh reserve at the cut-off and is also unlikely to earn a spot in the field for next week’s Dubai Desert Classic.

Meanwhile, The R&A and the men’s European Tour have committed to help the newly formed joint venture between the Ladies Professional Golf Association (LPGA) and the Ladies European Tour (LET) in its efforts to significantly grow playing opportunities, financial incentives and television exposure for women’s professional golf in Europe and around the world.

As well as providing financial support and leveraging other assets they manage, the bodies will each have one seat on the new LPGA-LET joint venture board of directors.

Martin Slumbers, chief executive of The R&A, said, “Building a strong and sustainable Ladies European Tour is fully consistent with the aims of The R&A Women in Golf Charter. We support the vision of the LPGA-LET joint venture to create significantly more opportunities for women and girls to pursue their dreams in golf here in Europe and to inspire future generations to take up the sport. We look forward to working with the LPGA-LET team as a board member of this important venture.”