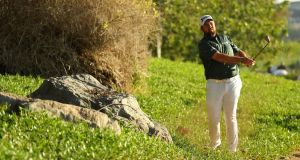 Shane Lowry plays his second shot on the 11th hole during the first round of the Abu Dhabi HSBC Championship. Photograph: Warren Little/Getty Images

Reigning champion Shane Lowry began his Abu Dhabi Championship defence with a round of two-under-par 70 on Thursday as his playing partner and world number one Brooks Koepka fired an ominous warning to his rivals by returning from injury with a superb opening 66.

Koepka, who had not played since October, showed no signs of rust as he carded six birdies in a bogey-free round to lie two shots off the lead held by Italy’s Renato Paratore and South African Shaun Norris.

The four-time Major winner had stem cell treatment on his left knee at the end of August but aggravated the problem after slipping on wet concrete during the CJ Cup in South Korea and was forced to withdraw from the United States team for December’s Presidents Cup.

“It’s good to be back,” Koepka told Sky Sports. “I missed the competition obviously.

“Played really solid. Missed a few putts early if I really want to pick it apart. Drove the ball well. Controlled ball flight and controlled distances really well and that’s what you have to do out here.

“Usually in the afternoon the wind picks up and you know that going in so when you have a morning tee time, you have to take advantage of it. I did that today.

“Hopefully tomorrow the wind stays down a little bit because this golf course into the wind, or with the wind, can be very difficult.”

Asked about his knee, Koepka added: “It feels fine. It was a little sore last night. That’s expected. This is the first week I’ve walked 18 holes and I’ve done it three times already. It’s a little tired.”

He went on to make birdies on the third and eighth holes coming home, but made a bogey on the fifth, to finish on two-under 70.

Ryder Cup captain Pádraig Harrington was one under with five holes to play before a disastrous finish that included three bogeys and a double-bogey on the par-three seventh as he carded a four-over 76.

In the week when the European Tour’s bid to stamp out slow play came into force it felt fitting that Paratore, who is renowned as one of the quickest players in the game, set the early pace with a superb 64 which was matched later in the day by Norris.

Paratore and Norris both carded nine rounds and a solitary bogey to enjoy a two-shot lead over Koepka and Australia’s Jason Scrivener, with Sergio Garcia among the group a shot further back.

“I made some good putts the first few holes so that give me good confidence for the rest of the day, and I keep making putts, so it’s been a really good day.”

Norris, who ended last season with a victory, three second places and two other top-five finishes in the space of 10 events in Japan, said: “It will be a dream come true to win a European Tour tournament, never mind a Rolex Series event.

“I’m sticking to my guns. Stick to the same game plan and just go out there and have fun.

“It’s been a rough year last year after losing my father. But my brother is back on the bag again and it feels like everything is working at the moment. We are having a lot of fun out there, and that’s the main thing. Really happy with what’s happening.”

Two-time winner Tommy Fleetwood, who made up the three-ball with Lowry and Koepka, is seven shots off the lead after an opening 71, while 15-year-old English amateur Josh Hill – who beat Koepka in a practice match earlier this week – returned a two-over-par 74.

LEADERBOARD
Par 72, British and Irish unless stated, (a) denotes amateurs