Meanwhile, Vijay Singh breaks through on the Seniors Tour, word of mouth and more 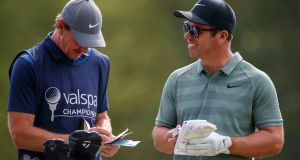 Paul Casey, right, laughs with his caddie John McClaren during the final round of the Valspar Championship. Photo: Mike Carlson/AP Photo 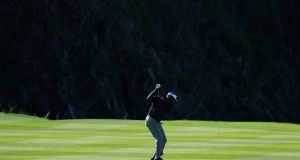 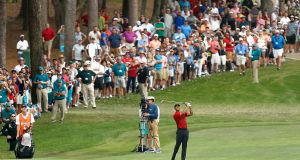 Woods plays his second shot on the 18th hole during the final round of the Valspar Championship. Photo: Michael Reaves/Getty Images

Good job Paul Casey figured something was wrong with the numbers provided by his caddie John McLaren when they were on the tee box of the Par 3 17th hole of the final round of the Valspar Championship.

Proving that even the best in the business can get it wrong sometimes, McLaren – one-time bagman for former world number one Luke Donald before jumping ship to Casey – made a rare error when he was mistaken in his yardages to the flag placement on the penultimate green as Casey sought to close out the tournament.

“For some reason, (McLaren) gave me 206 (yards) pin or something, ‘land it 180’,” recollected Casey of the critical information. But the alarm bells went off in Casey’s head and the tee-box discussion resulted in the duo working out the correct yardage as the Englishman ended his long-time winning drought on the PGA Tour.

Watching on television, European Tour player Simon Khan was brought back in time to another incident which he witnessed involving Casey and his previous caddie, Craig Connelly. As Khan put it, “Brilliant interaction between Casey and Johnny Mc on 17 followed by most English ‘oh shit’ ever. That was nothing, played with him at 06 Open and he had stand up argument with @theweeman on par 3 9th for 5 mins, it was comedy golf.”

It was a good thing for Casey – and McLaren – that the numbers finally added up on this occasion; and also a good thing for Europe Ryder Cup captain Thomas Bjorn, who successfully persuaded the player back into the fold (to rejoin the European Tour) for this year’s match against the USA in Paris.

Casey, an ever-present on Ryder Cup teams from 2004 to 2008, but surprisingly overlooked for a wild card pick by Colin Montgomerie for the 2010 match at Celtic Manor, subsequently relinquished his European Tour membership which made him ineligible to play. However, Bjorn’s diplomacy skills and a reduction from five to four in the number of required European Tour events outside of the Majors and WGCs combined to bring Casey back into the equation.

The win in the Valspar moved Casey up to 10th in the latest world points qualifying table, still outside an automatic selection but a move in the right direction.

“It’s becoming a young man’s sport and so it’s very rewarding to be able to go up against the young guys and still be them and still compete with them. It’s one of the reasons I want to play a Ryder Cup (again), I want to play against a different generation. JT and Jordan and Rickie . . . I think the place I’m in and how good this feels and although it’s been nine years since the last victory, there is no reason I can’t get more victories this year,” said Casey, who turns 41 in July.

When Vijay Singh turned 50 – back in 2013 – there was a general assumption that the giant Fijian would dominate the Champions Tour.

It didn’t quite turn out that way, though; and Singh – finally – broke his duck on the seniors circuit on Sunday when he claimed the Toshiba Classic.

With three Major titles – two US PGAs and one Masters – on an impressive CV that featured no fewer than 34 wins on the PGA Tour, Singh’s transition to life on the Over 50s circuit proved to be a surprisingly difficult one as he found it a tough nut to crack.

In providing a self-analysis of why it proved to be so difficult, Singh remarked: “ I just put a lot of pressure on myself. Every time I teed up, I thought I had to win. The more I did that, the more I didn’t win, the harder it got . . . my patience has been really bad. I haven’t been a patient golfer. If things didn’t go right for me with the first round or so, I just didn’t want to be there. So that’s just the mind-set I had for a while. I can be hitting the best, playing the best golf, but if your mind’s not right, you’re not going to win.”

656-388-149: No, not a phone code, its the upward trending of Tiger Woods in the world rankings: Woods started the year ranked 656th, was 388th going into the Valspar Championship and has now jumped to 149th, his highest ranking since May 2015.

“Match play, it’s kind of do or die for me. Either I’m winning and I’m staying, or I’m losing and I’m going home” – Henrik Stenson – clearly not a fan of the pool round-robin format – on why he won’t be playing in the WGC Dell Matchplay next week.

“Wow, what an amazing week...people, atmosphere, adrenaline, back nine on Sunday, man I’ve missed this. Getting better. Thank you for all the support!” – Tiger Woods on being back in the game, chasing Ws again.

“40 the new 20-something?! Phil Mickelson, 47, ends drought of 4+ yrs & now well done, hearty congrats @Paul_Casey, 40, on 1st @PGATour win since 2009. Fantastic 65 w/ just 21 putts at @ValsparChamp! And well done @TigerWoods! You’re getting there my friend. Sure it won’t be long!” – Jack Nicklaus getting excited by El Tigre’s return to back-nine of a Sunday action.

“Tiger Woods, I love you” – singer Niall Horan among those happy to see the big cat purring again.

“Amazing win for @Paul_Casey at @Valspar!! Congratualtions my friend! And, I have to say, it’s brilliant to see @tigerwoods back!!” – Ryder Cup captain Thomas Bjorn kind of happy with Casey’s win.

A: Yes, subject to the following considerations:

In match play, if the opponent then makes a claim (Rule 2-5) and the Committee, after examination of the original ball, upholds the opponent’s claim, the player would lose the hole. Otherwise, the result of the hole would stand as played. In stroke play, the player may also play a second ball in accordance with Rule 3-3.