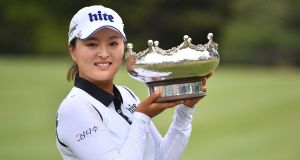 The contrast between the two couldn’t be more stark: the tears were already falling down Bubba Watson’s face before his caddie Ted Scott got to give him a congratulatory hug on the 18th green after his latest Genesis Open win at Riviera; yet, Jin-young Ko, the wire-to-wire winner of the ISPS Handa Australian Women’s Open on the LPGA Tour was the picture of calmness, very much in control of her emotions. The Ice Queen.

Indeed, there is a strong case to be made that Ko’s win was the most notable of any over the weekend. Why? Well, it was the 22-year-old South Korean rookie’s first appearance as an LPGA Tour member . . . . and she became the first player in 67 years to win in her debut tournament, a feat previously accomplished only by Beverley Hanson back in 1951.

So, a new Ko – not related to Lydia Ko – has immediately announced her arrival on the professional scene and all the indications are that she could be as big a force as any of that wave of players from South Korea who have dominated the sport for the past decade.

It was in capturing the KEB-Hana Bank Championship last October – on the Korean Tour, but an event co-sanctioned by the LPGA Tour – that Ko earned exempt status onto the US circuit which, increasingly, has become a global one.

Ko’s three stroke win over compatriot Hye-jin Choi in Australia gave her an 11th professional career title and her latest career victory moved her up four places to 16th in the Rolex world rankings, with no fewer than eight of her compatriots ranked above her!

The next two tournaments on the LPGA Tour move on from Australia to Asia, with this week’s Honda LPGA Championship in Thailand and next week’s HSBC Women’s World Championship in Singapore offering young Ko further scope for success.

“I was kind of skiing uphill with my putting” – Jordan Spieth on how he struggled with putting at the Phoenix Open and Pebble Beach Pro-Am, but confident that he has remedied matters with the short stick building up to the Masters.

“I want to drive it off a cliff! That beeping noise has been driving me insane” – Neil O’Briain after driving 1,200km from the Eye of Africa PGA Championship to compete in qualifying for the Dimension Data Pro-Am tournament with the alarm sound of a faulty door accompanying him en route. The 31-year-old Dubliner’s long distance drive was worth the effort, as he qualified and then secured a career-best third place finish in the Sunshine Tour event (earning €23,000) which has moved him to 41st in the latest order of merit standings. O’Briain – thankfully free of rib and hip injuries which hampered him last year – will hope to bring that momentum on to this week’s tour stop, the Cape Town Open. If he stays within the top-50 on the money list at the end of the season in March, he will have a full status card for next season.

“SERIOUSLY, Kevin Na?!?! That Is A Tap In, MATE!” – English cricketer Kevin Pietersen was not amused by the amount of time Kevin Na took – one minute and five seconds – in lining up and marking and re-lining up a short putt during the final round of the Genesis Open.

“Congrats @bubbawatson on winning the @genesisopen Proud to add you once again to the impressive list of champions at Riviera” – Tiger Woods tips his cap to the champ, a three-time winner of the LA Open.

That Is A Tap In, MATE! pic.twitter.com/YMmNT6m5H7

A new partnership association with Bridgestone, the world’s largest tyre manufacturer, and the Golfing Union of Ireland is set to add further prestige to the quest for the order of merit titles.

The Bridgestone Order of Merit – for the Willie Gill Award – and a separate Boys’ International Order of Merit will recognise the highest performers in Irish golf across the season, with the added incentive of two automatic places from the rankings earning places on the Ireland team for the Home Internationals.

Bridgestone has a long association with the sport – most notably with the WGC Invitational at Akron on the PGA Tour – and the new tie-up with the GUI is initially for a one year period, but with the hope that it will be a long-term sponsorship arrangement.

Eight tournaments – the West, North, South and East of Ireland championships, the Flogas Irish Amateur Open, the AIG Irish Close, the Munster strokeplay and the Connacht strokeplay – will make up the schedule for the Order of Merit, while the Boys’ rankings will comprise all international events (Ireland v Wales, Ireland v France, the Peter McEvoy Trophy, the Fairhaven Trophy, the Sir Henry Cooper Junior Masters, the Boys’ Home Internationals, the Boys’ Amateur Championship, the European Boys’ Team and the Jacques Leglise Trophy) to reflect the GUI’s commitment to exposing young talent to international competition.

“The order of merit is like an end-goal for the season. If you play well in each of the championships you’ll be up there to really feature. For me, it’s a goal, but not something I focus on (immediately) because if you play well in the championships you’ll be up there. And, especially now, it is something you would love to feature in and try and win,” said Alex Gleeson, a member of the winning Irish team at the past three Home Internationals, at the sponsorship announcement.

5/52: Dustin Johnson’s reign atop the official world rankings has reached 52 weeks – a full year – and, in doing so, he has become the fifth player to achieve the feat: the other four players were Tiger Woods, Greg Norman, Nick Faldo and Rory McIlroy.

Q: A player’s ball lies under a tree. The player deems the ball unplayable and drops a ball three club-lengths from where the ball originally lay. Before playing, he is informed that he dropped the ball in a wrong place. The player lifts the dropped ball under Rule 20-6 and realises that, if he drops the ball within two club-lengths of the spot where the ball originally lay, it is likely to be unplayable. May the player replace the ball in its original position, incurring a penalty stroke under Rule 18-2?

After lifting a ball, a player is entitled to replace it in its original position only if he has not yet put it back into play under an applicable Rule. However, in that case, the player may incur a penalty of one stroke under Rule 18-2 for having lifted his ball without authority