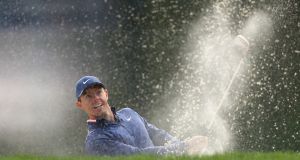 Rory McIlroy plays a shot from a bunker on the 12th hole during the first round of the Valspar Championship at Innisbrook Resort Copperhead Course in Palm Harbor, Florida. Photograph: Sam Greenwood/Getty Images

Rory McIlroy’s Masters preparations suffered another blow as he struggled to an opening 74 on his maiden appearance in the Valspar Championship.

McIlroy’s only birdie came courtesy of holing a bunker shot on the seventh, his 16th hole of the day, while two bogeys and a clumsy double-bogey seven on the fifth left him three over par.

The 28-year-old began the season in superb form with a tie for third in Abu Dhabi and a runners-up finish in Dubai, but missed the cut on his first PGA Tour start at Pebble Beach and followed that with a tie for 20th in the Genesis Open and 59th in the Honda Classic.

McIlroy told a pre-tournament press conference at Innisbrook that he was “totally ready” for the Masters and felt he would have a good chance of the victory he needs at Augusta National to complete the career Grand Slam if the first Major of the year got under way this week.

But his performance on Thursday told a somewhat different story after starting from the 10th with 10 straight pars before failing to get up and down from a greenside bunker on the second.

Worse was to come on the fifth after a wayward drive into the trees forced McIlroy to pitch out sideways, a mistake he compounded by taking four to get down from just short of the green.

And although the birdie on the seventh repaired some of the damage, McIlroy dropped another shot on his final hole to finish three-over par, seven shots off the early clubhouse leader, Canada’s Corey Connors. South Korea’s Whee Kim and American Kelly Kraft are a shot off the lead on three under.

Masters champion Sergio Garcia had to settle for an opening 70 after dropping two shots in his last six holes, with Ryder Cup team-mates Justin Rose and Luke Donald also finishing one under par.

Waterford golfer Séamus Power was also part of the early starters but struggled with a five-over 76 that included seven bogeys and two birdies.

Shane Lowry, Pádraig Harrington and Graeme McDowell are among the late starters in the first round.