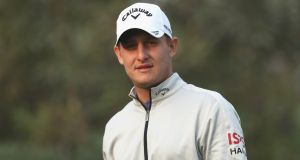 Agrentina’s Emiliano Grillo opened up a four-shot lead heading into the weekend at the Indian Open but will be wary of local hope Shubhankar Sharma, who posted a new course record on Friday.

Grillo fired a four-under-par 68 to get to an 11-under total after two rounds at Gurgaon’s DLF Golf and Country Club and looked set to take a commanding lead into round three.

But Race to Dubai Rankings leader Sharma surged into contention with six birdies on the back-nine to sign for a 64.

Sharma, 21, fresh off a tied-ninth finish at last week’s WGC-Mexico Championship, capped a dramatic turnaround considering he was five-over after his first nine holes on Thursday.

“Today’s round will definitely rank up there as one of my most significant achievements, especially when it is played at this course,” Sharma, who will make his major debut at next month’s US Masters, said.

“If you told me I would be seven under par going into the weekend after being five over par on my opening nine holes yesterday, I would just have laughed.

“To be able to bounce back is really important, I knew I was playing well and I had to push myself a little.”

Spaniard Pablo Larrazabal and England’s Andrew Johnston shared the third spot at six-under after rounds of 71 and 66 respectively.

Ireland’s Darren Clarke made the cut after adding a 73 to his opening 72 for a one-over total. That left him in tied 34th place. Play was halted in Delhi due to bad light with nine players yet to finish their second rounds.