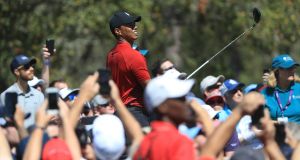 Tiger Woods plays his shot from the fifth tee during the final round of the Valspar Championship at Innisbrook Resort Copperhead Course in Palm Harbor, Florida. Photo: Sam Greenwood/Getty Images

Tiger Woods didn’t just stir again, he roared; but while the former world number one confirmed his fitness wellbeing after spinal fusion surgery, ultimately it was Paul Casey – set to resume his Ryder Cup career again – who took the acclaim in the Valspar Championship over the Copperhead course at Innisbrook resort in Florida.

Casey, securing his first win on the PGA Tour since his Shell Houston Open success back in 2009, and his first win anywhere since his KLM Open win in Holland in 2014, shot a final round 65 for 10-under-par 274 that enabled him to leapfrog up the leader board to the top spot with Woods and Patrick Reed a shot adrift.

With the old Tiger roars reverberating around the course on a Sunday just like the days of yore, Woods – who rolled in a 44 footer for birdie on the 17th – kept his quest alive right to the final hole. But needing a birdie to force a playoff with Casey, Woods’s 38-footer came up short and his 70 for 295 left him one shot behind the Englishman.

Casey’s win – only his second on the PGA Tour – strengthened his Ryder Cup world points qualifying and came after a final round which saw him use the putter just 21 times.

Although he admitted to getting “bitten” in the Snake Pit on Saturday, where he was twice in the water, the Englishman avoided any such issues when it matter in the final round to claim victory, a shot ahead of Woods and Patrick Reed.

Reed bogeyed the 18th after making an unwise play on the finishing green, opting to use a putter rather than a wedge and then seeing his initial putt fail to reach the cup and roll back to his feet. “I just didn’t hit it hard enough, obviously. Absolutely killed it and the ball rolled back down to where it was,” said the American.

Casey, who has struggled on the greens in final rounds recently, pointed to that department of his game as the biggest positive.

“It’s very rewarding to have a good putting Sunday. It’s the thing that’s been holding me back and the frustrating thing for a couple of years. Although they weren’t long putts the putts on all three, par putts on 16, 17 and 18 were tricky little things, right to left, dead straight and then left to right.

“I sent them all beautifully, right line and speed. I haven’t done that in an awful long time. I didn’t feel like I missed any opportunities last season for wins because I purely didn’t putt good enough, no strokes gained on the weekend.

Shane Lowry finished with a72 for 286, two-over, which left him in tied-49th. Unfortunately, it wasn’t sufficient to earn him a spot in the upcoming WGC Dell Matchplay in two weeks time, with the cut-off point (the top 64 available off the world rankings) coming after the Valspar.

Graeme McDowell’s closing round 71 for 284 gave him a tied-40th finish. Both McDowell and Lowry – as well as Woods – head on to this week’s Arnold Palmer Invitational at Bay Hill.

3 Johnny Sexton circles the wagons and insists Ireland are improving