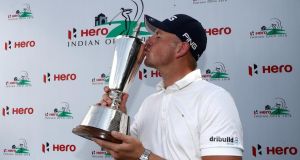 Matt Wallace believes he played some of the best golf of his life to secure his second European Tour title at the Hero Indian Open.

Wallace defeated Andrew Johnston in a play-off at the DLF Golf and Country Club in New Delhi after the pair had posted final rounds of 68 and 66 respectively to finish on 11 under par.

The 27-year-old won it at the first extra hole, hitting a monster drive down the 18th and then a fine second shot to enjoy the luxury of two putts for the crown.

Wallace, who had found himself three over through eight holes of his opening round, told europeantour.com: “I’m ecstatic. I just played some amazing golf.

Ever since being three over through eight at the start of the week, I’ve played some of the best golf of my life and to do it in that style at the end there capped it off.

“There are some great champions. SSP (Chawrasia) held it for a couple of years there and I am so happy to get my name on the trophy.

“I hit some really good shots and that play-off... To hit two shots like that is exactly why I play the game.”

Wallace shared the lead with in-form home favourite Shubhankar Sharma heading into the final round, but the Englishman stormed in front with five birdies and a bogey to card 68.

Sharma, who broke the course round on Friday with an eight-under-par 64, saw his challenge disintegrate as he registered a three-over 75 which contained three double-bogeys, three further dropped shots and six birdies.

Johnston produced a blemish-free 66 in the final round to surge within touching distance of victory, while American Sihwan Kim (68) finished in sole third on eight under.

Spain’s Pablo Larrazabal (69) threatened to challenge after carding five birdies to reach 10 under, but bogeys at the 14th, 16th and 17th saw him drop to tied fourth alongside Austrian Matthias Schwab (70), who recorded his best finish on the European Tour.