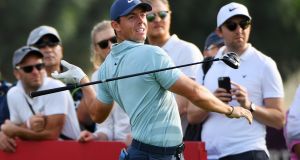 Rory McIlroy: will be hoping to bounce back to form in the Arnold Palmer Invitational at Bay Hill. Photograph: Ross Kinnaird/Getty Images

Nobody’s pressing any panic buttons just yet, least of all the man himself, but – with the US Masters less than a month away – time is not Rory McIlroy’s friend right now.

With two missed cuts from four tournaments on the PGA Tour so far this season, the 28-year-old Northern Irishman’s chances of a confidence boosting win before he gets to Augusta are diminishing. He has two more opportunities.

Having mapped out his most intensive pre-Masters playing schedule, the best-laid plans and all that didn’t factor in missing cuts as part of the equation.

So, in the wake of another missed weekend at the Valspar Championship, where he was reduced to watching Tiger Woods’s endeavours from the comfort of a sofa rather than being part of the action, McIlroy got his coach Michael Bannon to remain on in Florida to work on his iron play, an area of his game which has proved most troublesome of late.

McIlroy pinpointed the problem as primarily a timing one.

“There’s a bit of technical stuff in there that I need to address . . . I think if I fix the technical thing the timing will come back with it; it’s just where the club is at the top, it’s having to travel a greater distance to get back to the ball.”

At least he is aware of the fault that needs fixing and past history has shown that he usually finds a solution.

McIlroy talked of “synching everything up” in working with Bannon at the Bears Club before getting to this week’s Arnold Palmer Invitational at Bay Hill in Orlando. He then completes his US Masters build-up by competing in next week’s WGC-Dell Matchplay championship, where he will be the lone Irishman in the field.

The results of late show McIlroy’s game has regressed since he moved back to the PGA Tour having contended in both Abu Dhabi and Dubai earlier this year, and clearly he needs something to click back into place. It could be as soon as this week, or the matchplay . . . or even the Masters itself.

With the cut-off for eligibility for the Dell Matchplay coming after the Valspar (with the top 64 players available off the world rankings eligible), McIlroy is the only Irish player to make the grade.

Shane Lowry needed a top-seven finish to make a move up the world rankings, with possible no-shows (Justin Rose and Henrik Stenson have already said they won’t be playing the matchplay) meaning the final cut line could enable the 68th or even 69th ranked players making that field.

Unfortunately for Lowry, his world ranking – 75th – is too far adrift to expect any late call-up. Instead, Lowry, who at least survived the cut in the Valspar only to fall away over the weekend, will join McIlroy, Graeme McDowell and Pádraig Harrington in the field at the Arnold Palmer Invitational where the Tiger factor will again be in evidence as he carries the momentum from his runner-up finish in Innisbrook.

This will be Woods’s final tournament before he heads to the Masters, and it is a return to a very happy hunting ground. Woods is an eight-time winner of the Arnold Palmer Invitational through his career and this is his first time to play since Palmer died.

“Unfortunately I didn’t play before his passing. It’s going to be good for me to get back. I’ve had some great memories there. I hadn’t played there in a couple of years because of my back.”

Paul Casey, whose win in the Valspar moved him to 10th in the European Ryder Cup world points qualifying, has bypassed the tournament in Bay Hill this week to return to England for the funeral of a friend.

Casey, though, has confirmed he will play in the BMW PGA Championship in May, the European Tour’s flagship tournament at Wentworth where the process of increased weighting of points commences.

Casey, a previous winner, hasn’t played in the championship for the past four years due to a combination of injuries and family commitments in the United States.