Out of Bounds: Should we (Europe) be worried? 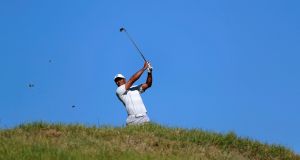 Tiger Woods has been added to the US Ryder Cup backroom team. Photograph: PA

Should we - the we in question being Europe - be worried? Although there might seem a long way yet to go to the Ryder Cup in Paris in September, the reality is that clock is ticking down and at this stage it appears as if the United States have stolen an edge, even if they are the visiting team with all of the baggage that has accrued in recent decades.

Thomas Bjorn, the European captain, has so far only named one vice-captain: Robert Karlsson, his long-time best friend on the circuit. The giant Swede is as amiable as they come; yet he is hardly comparable to the heavy-hitters opposing USA captain Jim Furyk has gathered in his corner.

Furyk’s addition of Tiger Woods and Steve Stricker this week to his backroom team, having previously brought two-time captain Davis Love III into the fold, is further proof of how seriously the Americans take the match these days, having borne the brunt of Europe’s dominance in recent decades. The wounded animal has reacted.

The role of vice-captains has evolved over the ages, and it is not a jolly in any shape, way or form

The figures of European dominance are quite remarkable, really: Europe has won six of the last eight stagings of the Ryder Cup, and the last time a visiting USA managed to get their hands on the old trophy was in the 1993 match at The Belfry in the English midlands. In this era of the new millennium, it has party-time for the Europeans, certainly at home and more often away.

A sea change appears to have taken place in the American mentality of late, though. The straw that broke the camel’s back, so to speak, was the manner in which Paul McGinley completed out-manoeuvred Tom Watson at Gleneagles in 2014 where Phil Mickelson’s criticisms of his captain took no prisoners. Mickelson’s filleting was brutally honest, but it led to a detailed review which certainly seems to have bonded and inspired: that much was obvious at Hazeltine last time out and appears to have continued under Furyk’s leadership.

In the past, the role of vice-captains was under-appreciated. Pádraig Harrington even joked about having to fetch coffee and bananas for Bjorn when he fulfilled such a role for McGinley in that match at Gleneagles where the Dane made the team.

But the role of vice-captains has evolved over the ages, and it is not a jolly in any shape, way or form. Davis Love fulfilled the role of captain in the USA’s clear-cut win over Darren Clarke’s men in Hazeltine two years ago and this time will bring that experience in a vice-captaincy role, which more than anything demonstrates how the American mindset has shifted. Losing hurts.

Indeed, Love made a very interesting observation the other day in recognising how Woods - one of his vice-captains in 2016 - embraced the changing role of a lieutenant: “There were past teams where we should up, figured out the pairings when we got there and then had to decide who was going to hit the tee shot on odd and even holes. Not anymore. Tiger was putting together potential pairings eight months before Hazeltine.

“Based on the strategy of the course, he had already picked out which holes which players would tee off. Six months before those matches, he was making pairings based on good weather and bad weather situations.”

In a way, it seemed as if the USA had borrowed - or stolen! - the template used so successfully by Europe. Yet, given the increased importance of such vice-captains, the USA would seem to have stolen a march this time round. Furyk’s team of Woods, Love and Stricker ticks so many boxes and have the advantage of getting a head start coming into Majors season.

Unless Bjorn has secretly told his would-be vice-captains of what he expects of them . . .