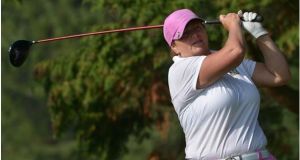 The Island’s Gertie McMullen had to settle for a share of fifth in the Spanish International Senior Ladies Amateur Championship in Malaga. Tied for the lead with Tita McCart of the Netherlands entering the final round, one clear of the field, she closed with a 79 to finish four shots behind Siene Dresselhuys of the Netherlands on 17-over 233 at Parador Málaga Golf.

Conor O’Rourke birdied his last two holes to tie for seventh in the Mediterranean Tour’s Katameya Dunes Championship in Egypt. The Naas man followed an opening 74 with two 71s to finish six shots behind winner Christopher Sahlstrom on level par 216 at the Nick Faldo-designed resort near Cairo.

The Swede followed a pair of 71s with a 68 to win by a stroke from Austria’s Florian Prägant on six-under with Maxime Radureau of France a shot further back.

Castleknock’s David Carey was 35th after a tough day, making just two birdies in an 80 to finish on 13-over. The Island’s Kevin Le Blanc (80 76) missed the 36-hole cut by six shots.

Another top-10 for Maguire

Leona Maguire was 10th and Olivia Mehaffey 15th in the Darius Rucker Intercollegiate on Hilton Head Island. Leading after a first round 66, Arizona State’s Mehaffey followed a second round 79 with a 75 to finish 10 strokes behind Arkansas’ Maria Fassi on seven-over par with ASU 14th.

Fassi shot a two-under 69 to win by two from Alabama’s Lauren Stephenson on three-under as Alabama took the team honours. Auburn’s Julie McCarthy tied for 56th on 16-over 229 following rounds of 75, 78 and 76.

Ten of the 16-strong Irish senior panel have entered the Radisson Blu Hotel & Spa sponsored West of Ireland Championship at County Sligo starting on the Easter weekend. While Dundalk’s Caolan Rafferty and Galway’s Ronan Mullarney are contracted to play in the clashing R&A Scholars Tournament at St Andrews as part of their arrangements with Maynooth University, the rest of the Irish squad - bar US-based Conor Purcell (Portmarnock), John Murphy (Kinsale), Rowan Lester (Hermitage) and Paul McBride (The Island) - are planning to tee it up at Co Sligo.

The Connacht Branch has received 263 entries and up to 100 players are expected to play in the 18-hole strokeplay pre-qualifier on Wednesday, March 28th. At least six places will be up for grabs although it’s likely to be more with withdrawals and other factors allowing 15 players who entered the pre-qualifier to tee it up in the Championship last year.

For the Championship proper, there will be a shot-gun start for the 126-strong field on March 30th and 31st with the top 64 after 36 holes qualifying for the matchplay stages with the final set for Tuesday, April 3rd.

Due to light restrictions, a card countback will decide ties for 64th place after the second round of strokeplay qualifying, rather than a playoff.

Asia-Pacific won the Bonallack Trophy with a 16½ to 15½ victory over Europe after three days of competition at Doha Golf Club Qatar. It is the first time they have won the amateur men’s biennial match since 2004.

Asia-Pacific held a narrow lead after the first-day four-ball and foursomes matches, but trailed by two points after day two.

Ireland’s Robin Dawson and his partner Marc Hammer won two and a half points from their four matches but in the singles on the third day, Asia-Pacific won five of the first seven matches to take a one-point lead. At this point, Europe needed three more points to retain the trophy and were up in two and down in three of the remaining matches.

The outcome, however, would come down to the match between Matthew Jordan and Osawa Kazuya. Jordan needed to win the 18th hole to score the half-point Europe needed to retain the trophy, and had a two-metre putt to do so. Unfortunately, the putt missed and the hole was halved, meaning Asia-Pacific took the match.

Although the men’s match was very close, the second edition of the ladies’ match for the Patsy Hankins Trophy was decided early. Asia-Pacific secured victory at the end of day two after winning eight of the day’s 10 matches. Europe managed only one victory over the first two days, which was delivered by Bianca Fabrizio and Blanca Fernandez.

Despite the match already being decided, the European women were more successful in the singles matches. Blanca Fernandez, England’s Annabell Fuller and Isobel Wardle, Zhen Bontan and Ireland’s Paula Grant all won their matches.

Golf Digest Ireland has announced its annual ranking of the top 100 courses in Ireland for 2018.

Royal Co Down retained top spot ahead of Royal Portrush and Portmarnock with the Glashedy Links at Ballyliffin now ranked tenth following improvements made to the course for July’s Irish Open. The biggest mover in the top 20 is Enniscrone, which has risen two places to 12th.

Balbriggan Golf Club and Royal Tara dropped out of the Top 100, while Roe Park, Dundrum House and Rathsallagh are new entrants.

1 Gordon D’Arcy: Digging deep only recipe for Twickenham success
2 Robbie Henshaw and Bundee Aki to lead from the centre
3 Jurgen Klopp: ‘welcome to Anfield, it’s not over yet’
4 Kieran Donaghy calls for GAA to shut down fans’ forums
5 Seán Moran: GAA in trouble if sectional interests not accountable to rules
Real news has value SUBSCRIBE