Tipping Point: Cork play soldiers in the sand as the Covid war rages on 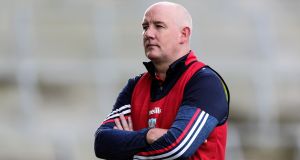 Watching footage of the Cork commandos wriggle around on a beach in Youghal last week would put you in mind of the long-ago sketch show Big Train. There was a famous one called Jockeys In The Wild, where a group of little lads in full silks and riding breeches were stalked on a Serengeti-type plain by the Artist Formerly Known As Prince. If that all sounds a bit too surreal for your tastes, be assured it made more sense than an intercounty team meeting up for a Full Metal Jacket weekend in the current climate.

Yet there they were, Rebels In The Surf, crawling on their elbows and lumping logs above their heads like we live in normal times. It felt so removed from reality that you half-expected the footage to cut to the dunes, where a prowling modern popstar – a Dua Lipa, say – was hunkered down, ready to pounce.

Ronan McCarthy’s defence has been to say that no Covid regulations were broken and that all activities took place under strict supervision of the medical team but nobody is really buying it. The GAA has warned counties not to train collectively. Cork trained collectively.

No, they didn’t meet up and tog out like Down did on the grounds of Abbey CBS in Newry but that’s neither here nor there. The GAA weren’t aiming for nuance when they published their stance on this. The crux of it isn’t what teams do or don’t do when they meet up, it’s the act of meeting up in the first place. No training together means no training together. It isn’t difficult to understand.

Ordinarily, this wouldn’t be the sort of thing worth getting hot under the collar about. Plenty of counties trained away last summer when they weren’t supposed to and in all honesty it was hard to summon up any sort of dander about it. Though the general population still lived under various restrictions, Covid cases were low, the country was heading here and there on staycations, life was bearable. It was possible to feel some level of freedom our confinement.

Everything is different now. Everywhere is shut down. The weather is cat. The schools are closed. The News is a dose. Cases are soaring. ICU numbers are swelling. Brexit happened. Trump is still happening. Mrs Brown’s Boys will be happening long into the millennium. Everyone is cranky. There is plenty to be cranky about.

So the usual shrug that would normally greet sports teams pushing the envelope of what’s allowed in the name of finding an edge just isn’t available to most people now. People are tired. People are bored. People are inside with nothing to do and all day and all week and all month to do it.

More to the point, people are scared. Ireland’s case numbers went from the best in the EU to the worst on the planet in the time it took to go through a family box of Roses. On the day of the All-Ireland hurling final, there had been just over 76,000 cases recorded in Ireland since March 1st. That number will pass 150,000 today or tomorrow, meaning it has taken just four weeks to rack up the numbers of the first nine-and-a-half months of the pandemic.

This matters, not just because it is so obviously serious. It matters because of the way it makes people feel. All the sanctimony around what a great thing it was to have GAA championships at the back end of 2020 was only possible because at the time, Covid was something the country felt it was largely keeping at arm’s length. As recently as the day of the All-Ireland football final, there were still only 223 Covid cases in Irish hospitals, 29 of them in ICU. On Saturday night – just three weeks later – those numbers stood at 1,421 in hospital and 121 in ICU.

Covid has gone from something that was for most people an existential disruptor of life to something that genuinely feels like it is stalking the land. For those of us with family working in the health service – Up The Nurses, by the by – the tenor of idle conversation has gone from “Ah, Sure Grand” to “Please, Don’t Ask” in a fingersnap.

The upshot is that this feels like a much darker time than last summer, when the only cohort a county panel would really be annoying with an off-piste training session were the put-upon club managers from whom they were stealing players. Every trend, every number, every stat says these are going to be among the very worst weeks of the whole ordeal. For intercounty managers to behave like they are living in a world removed from it all is indefensible.

Of course, Cork and Down are in some ways unlucky to be the ones who were caught. County teams have always lived by Art McRory’s fundamental truth: “There’s no point me putting manners on my fellas if the boy up the road isn’t putting manners on his.” They wouldn’t need to have evidence that some of their competitors are breaking the ban to know it in their bones.

Fundamentally, intercounty football and hurling are slices of Irish life to be treasured. We can lose sight sometimes of the unique miracle it is that they exist at all. You only had to cock an ear last week at all those Mayo retirements to get a sense of the pure, undiluted love a people can have for their players and the authentic connections that drive the whole enterprise. You mess about with that connection at your peril.

Counties who break the ban will think they are doing their best to be the best. They will kid themselves that this is what it takes, that this is how winners are made, that living big lives means going to lengths the others aren’t prepared to.

But is it really?

Or are you just a gobshite with a mouthful of sand, being made to play soldiers while the war goes on without you?