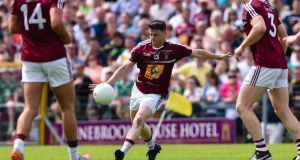 John Connellan in action for Westmeath. “The thing has snowballed and nobody has sat down and performed a forensic analysis of where we’re actually going. It has been allowed to gather momentum to the point where it’s a runaway train.” Photograph: Tom Beary/Inpho

John Connellan could generally be found in a Dublin jersey growing up in Athlone, drilling frees like Charlie Redmond and jinking past imaginary defenders in his garden like Jason Sherlock.

His dad Paul is a proud Dub, from Raheny, who lined out for the Blues in the 1975 All-Ireland U-21 final next to Brian Mullins before eventually moving to Westmeath.

“That’s why ‘Spike’ Fagan wasn’t my hero growing up, it was the likes of Jayo and Dublin players that I’d be copying in the back garden with the Arnotts jersey on,” smiled Connellan.

All of that is worth pointing out because if it seems like the former Westmeath player harbours some sort of grudge against Dublin, he really doesn’t.

The son of a solicitor, John is a barrister himself and that too is probably important to note when considering his quest for a realignment of coaching funds within the association. Dublin receives too much, he claims, arguing that this is neither equality nor justice.

Earlier this week, every club secretary in the country received an email from Connellan with the following text in the subject line; ‘Fair and Equal Funding for all GAA clubs – Addressing the GAA imbalance’.

The body of the email contained an 800-word synopsis of why he feels clubs should embrace a motion at their AGMs proposing that “All coaching and development funding must be allocated to individual counties on an equal basis based on registered GAA members in the preceding year in each county up to a maximum variance of 5%. Any proposal to allocate coaching and development funding in excess of a 5% variance must be brought to Annual Congress every two years for approval with a transparent plan and business case for such increased funding”.

The email calls on club executives and county boards to stand together on this issue, noting how in the period 2007 to 2017 – pretty much when he played for Westmeath, as it happens – Dublin GAA received €16.6m in coaching and development funding, “or 48% of the total funding allocated to Republic of Ireland counties, in spite of only 25% of the total population being located in Dublin. In the same period, Galway only received €784,077, Westmeath €725,501 and Cavan €613,078, for example”.

He claims, for instance, that providing funding for an army of local coaches around Dublin for so many years now has effectively led to the creation of a number of ‘superclubs’, or mini-academies.

“The doubling of GAA membership within Dublin and participation rates as a result of the promotion of GAA games in schools across Dublin is a welcome development,” writes Connellan. “But what is completely missed in the debate is the effective doubling of the main income stream in nearly all Dublin GAA clubs, of their membership income.”

He also notes the ability of clubs to generate significant sponsorship income, claiming one club “not even at Senior A level was able to secure a sponsorship deal totalling €175,000 over five years, or €35,000 per annum”.

Connellan’s arguments go on and on – he criticises the GAA, as well as RTÉ, for basically avoiding the issue – though he consistently comes back to a simple issue of fairness. For him, a cash-rich Dublin no longer requires propping up with “disproportionate” funding.

“Look, I can see exactly why the decision was taken to pump money into Dublin because the GAA was losing out to other sports in the capital, and that’s not a good look for the GAA,” said Connellan.

“But the thing has snowballed and nobody has sat down and performed a forensic analysis of where we’re actually going. It has been allowed to gather momentum to the point where it’s a runaway train.”

John admits to being “disillusioned about the whole thing” when he retired from Westmeath himself in 2017. So what about Ray’s future?

“I’ve never said this to Ray but even if we do get what we’re looking for with this push now, the reality is that change probably won’t be felt for another 10 years,” said Connellan, a former underage soccer international.

“There’s no quick fix for the likes of Ray and Westmeath in the near future. It’s never too late to do the right thing though, what’s the alternative?”

Solskjær disappointed United ‘didn’t pounce’ on injury-hit Liverpool 19:59
Alisson denies Man United as Liverpool go four without a win 18:49
Mesut Özil confirms Arsenal exit as he moves to Fenerbahce 17:37
Here is your handy guide to sport on television this week 17:01
Dreal Deal steps up again at Punchestown despite alarming drift in price 16:37