Tipping point: Beams of light were provided to footballing communities of Tipperary and Cavan 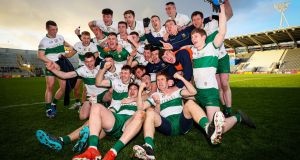 Nothing in sport beats the end of a famine. Not the last-minute goals, not the 80-yard tries. Not holing out from the fairway or a 170 check-out or a patient ride getting up on the line. All of those are great, some of them transcendent even. But they belong, for the most part, to the protagonist.

Much as we are all entitled to feel moved by Messi skipping around four tackles and turning the keeper into a lamp-post, it lacks a certain sense of belonging. On some level, because we are all immersed in sport and beauty and miracles, we might even claim some part of it as belonging to all humanity. Especially if it’s a Sunday evening and we’ve tied a few on. But it’s still his goal, or Barca’s goal, or Argentina’s goal.

The end of a famine is different. When a famine ends it’s about more than the famine-enders. They made it happen, yes. And it is because they did it will live on beyond them. It will be a line in their obituary when the time comes, and it will mean they are made men for as long as the famine is remembered.

But they’re only a part of it. The ones who came before them feel it just as deeply. More so, in some cases.

That’s what made Sunday in Páirc Uí Chaoimh and the Athletic Grounds such emotional affairs. Yes, there is an uncanny resonance in the 2020 All-Ireland semi-final line-up mirroring that of 1920, especially given the cloud of darkness enveloping both of those years, a centenary apart. But the beams of light provided to the footballing communities of Tipperary and Cavan by this one afternoon don’t have very much to do with ancient history. They find their meaning in much more recent struggles.

It was no surprise, therefore, to hear David Power so keen to talk about 85 years rather than 100 on Sunday. The Bloody Sunday commemorations fed into Tipperary’s first Munster title since 1935, but Power’s words were a reminder not to overdo it for the sake of a handy media line.

Tipp are Munster champions because he and his father before him and the small but fiercely committed group of Tipperary football people got the show on the road and kept it on the road.

My abiding memory of Power down the years is of seeing him standing outside Semple Stadium on big hurling days in the summer, shaking a bucket with Friends Of Tipperary Football on the side of it.

He would have been minor manager or under-21 manager at the time, and the people walking past him were invariably about to watch at least a few footballers who’d been through his hands walk in the parade for the hurlers.

Rattling his bucket for a few crumbs to keep his teams alive as a going concern was the kind of thing plenty of passers-by would admire. Good man David, fair play to you, keep it going. But to most of them he might as well have been collecting to save a rare species of badger. Tipp football? Well sure, if you’re into that kind of thing.

But he kept at it. And people like Pat Moroney and Mick O’Loughlin kept at it too. When Tipp got to the All-Ireland semi-final in 2016, we all went off in search of the football lifers, the folks down around south Tipperary who lived through all the hammerings and all the neglect and who were never drained of their faith.

Moroney did his time as a player, manager, selector and along with Power was a key driver of the development squads that were set up in 2007. The fruits of those squads are the Munster champions today, turning a page on 85 years when all they had was wishes and dreams. When I rang him in 2016, we talked a lot about structures and pathways and coaching and all that good stuff. But we talked a bit about magic and inspiration too.

“Back in 2010 they were stuck for someone to present medals to a west Tipperary under-14 team,” Moroney said. “They had nobody else so they asked me. So I said fine, but what will I talk to them about? I wanted something that might be relevant to them. I went off and photocopied the last Tipperary team that won an All-Ireland in 1920. I printed off copies for each of them, pictures with their names on them.

“And I said to them, ‘lads, in 10 years it will be 100 years since Tipp won an All-Ireland football title. Ye’ll be 24 or 25 years of age when the centenary comes around. We want to be there and see if we can win another one. And, lads, ye are the ones that we are depending to get us to Croke Park and do that job for us.’ You have to leave them with a message. You have to give them a goal. If you don’t aim high you won’t achieve.”

This is what made Sunday special. Cavan’s Ulster title is a salad day for them but football will never wither on the vine in Cavan. This year, next year, in a decade’s time, Cavan were going to find their way back to a provincial title. As they would say themselves, it’s bred into the hoors.

That kind of inevitability has never existed in Tipperary. Every kind of wind imaginable was against them – and will continue to be against them. Cork and Kerry will still be around in 2021 and beyond. So will Tipperary hurling. Happy and all as people will be at such a heart-warming tale, the continued success of the Tipperary footballers is in the interests of none of those three interested parties.

But on Sunday, 10 years after Pat Moroney told a group of 14-year-olds to think big, a few of them were on the panel that ended the famine. It belongs to the Tipp footballers, but it also belongs to 85 years’ worth of Pat Moroneys.