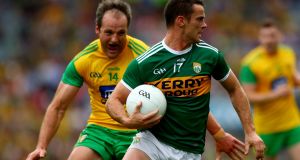 Kerry defender Shane Enright is the latest intercounty player to announce his retirement.

The 32-year-old leaves with one All-Ireland, six Munster titles, two National Leagues and one All-Star to his name.

Enright follows teammates Brian Kelly and Jonathan Lyne in retiring ahead of the 2021 season.

The Tarbert clubman announced the news in a statement.

“I’m privileged to have played with some of the best players to ever play for Kerry and to have made friends for life along the way.

“I have decided that the time is right to retire after 10 years wearing the green and gold jersey.

“It’s been an amazing journey and one that I will cherish as I move on.

“I want to thank my family first and foremost, without them none of it would have been possible. The people of Tarbert who were behind me all the way, the Kerry supporters who drove us on through the good and bad days.

“I also want to thank each and every management team I played under from my underage days with Tarbert right up to my days with Kerry. I learned something new from each and every one of you.”