Tipperary great Theo English dies at the age of 90 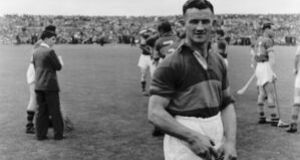 Theo English – who won five All-Ireland senior hurling titles with Tipperary – has died at the age of 90.

“It was with deep sadness that we learned this morning of the passing of former Marlfield and Tipperary great Theo English,” the Tipp county board confirmed via Twitter on Sunday.

“Tipperary GAA extends our sincere sympathies to Theo’s wife Maureen and his family at this very sad time.

English was also part of the Tipp backroom staff for the All-Ireland win in 1971 and was a selector when the county claimed the big prize again in 1989 and 1991.

His place in Tipperary hurling lore was made permanent when he was included in the county’s hurling team of the 20th century with seven Munster titles and eight National League medals to his name as well as his All-Ireland successes.