Tipping Point: It’s zero degrees as Waterford come in from the cold 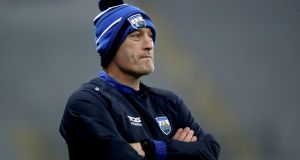 Waterford manager Liam Cahill: “I was talking to a fella this morning from Italy and he’s oblivious to anything to do with my other life.” Photograph: Bryan Keane/Inpho

Out the window the fog is so thick you can actually see it moving as it passes through the skeletal trees. The grass is white-tipped and crunchy underneath the foot. The kettle is on, ready to be poured on the car windscreen when needed. And everywhere you look, the slow, silent slide towards Christmas has begun. Welcome to the weirdest All-Ireland hurling final week there has ever been.

Forget the fact that there are no fan nights or signing sessions. No big country hotel function rooms jammed to the doors with people paying a tenner in to hear old soldiers sex-up war stories before the serious bit at the end where they order up a last pint and analyse the game. No pints, full stop. Forget all that and consider this – it is literally zero degrees outside.

Zero degrees! In the week of the hurling final. This does not compute. The hurling final has always meant back-to-school weather. The football final could often get dicey, maybe a bit squally or showery but not hurling’s communion day. Yet here we are, sending Limerick and Waterford out into the tundra. If nothing else it’s very on-brand for 2020.

For Liam Cahill to be here and preparing his team for the final is an outcome maybe only he could have come up with. Back in January the newbie Waterford manager sat down with The Irish Times over tea and scones in the Anner Hotel in Thurles. Back when sitting down for tea and scones in a hotel was the kind of thing you took for granted.

Over the course of an hour and a bit we chatted away about anything and everything. It hadn’t been overly long since he’d jettisoned Noel Connors and Maurice Shanahan from the squad so we touched on that, if only to get a sense of how hard it might have been for him to do it. Not, he pointed out with a fair splash of humanity, as hard as it was for them.

The longer we went on, the clearer it became that this was a chap who liked doing difficult things. He didn’t set out to make examples of Connors and Shanahan but he didn’t shy from doing what he felt had to be done either. It was in keeping with the rest of his life too.

As it happened we were meeting soon after he had taken up a new job. Not alone was he setting out on his first intercounty gig, he had also in the previous months joined Johnson & Johnson as a project manager. You’d have thought one life-changing switch of lanes would be enough for anyone. Not for Cahill, it seemed.

It was tempting to draw a handy parallel, of course.

On the one hand you’ve got your life in a big multinational, summarily discarding anything that isn’t going to make the bottom line not just better but substantially so.

On the other you’ve got a hurling team that hasn’t won a championship game since 2017, affording you the licence to clear out anyone you don’t see as being useful.

Jim Gavin made a dynasty out of applying the lessons from his professional life to his sporting one. Maybe the same could be said of the Tipperary man newly in charge of Waterford.

Cahill made it clear, though, that the one had nothing to do with the other. In fact the only way hurling intersected with his new gig was his specific inclination to separate the two as much as possible. He was in his early 40s, and for the whole of his working life hurling had gone hand in hand with whatever he did for a crust. That wasn’t going to be the case in J&J.

“It avoids having to talk to fellas who think they know about hurling,” he said that day in Thurles. “I was talking to a fella this morning from Italy and he’s oblivious to anything to do with my other life.

“I gave 20-odd years in the bank and in Ted Castle Oil, and every day of it I’d say I had fellas pounding your head about hurling. And it was great and I loved it. It was not a reason on any level behind me deciding to move on to something else. But it is great when you get a break from it too. It just changes things a little bit.”

That was 11 months ago. Nobody knew what the year held in store and anyone in the prediction business at the time wouldn’t have been long for this world. But you couldn’t come away from an hour with Cahill without being impressed. Nor could you want anything but good things for him.

In a million years, though, it was beyond implausible to imagine an All-Ireland final in his first season. Forget the rollercoaster year, forget the planet being put through the spin cycle, forget Covid and lockdowns and a life of face masks and everything else. Waterford in an All-Ireland final in 2020 would have been considered a figary too far had you suggested it when we met in January.

No wonder it’s zero degrees outside. Nothing else would make sense.