Malachy Clerkin: Sport feels like the only true thing in a world of spoof

Tipping Point: Pain of championship exit felt as keenly as ever during a pandemic 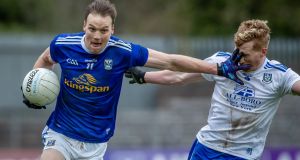 “Are they out?” asked my wife at a tender point of a tough weekend.

It was a reasonable question, of course. Not everybody is across the vagaries of the football championship structure, especially in this of all years. A better man would have taken the time to allow for this. A man with more perspective would have let it slide. I am neither of those men. Neither would they be if they had to put up with losing to Cavan two years in a row.

“Are they out?” I replied, dudgeon rising. “Are they out!? What sort of question . . . I mean how could you ask . . . Yes, they’re out. They’re out, out. Maggie Thatcher out. Gone. Kaput. Kablammo. Off to join the Choir Invisible. They are an ex-parrot.”

“Oh, I know what you mean. You mean is this still the league or is there a back door? No, the league finished last week. They nearly got relegated. And no, there’s no back door. If there was, they’d probably walk face first into it or try to open it with a banana. Anyway, there isn’t. There was no time for one this year. You might have heard of a little thing called a pandemic?

“But nothing. Look, I know this must all seem very silly and adolescent, especially in Such Serious Times. And maybe it is. But we haven’t had sport to care about in what feels like about a decade. Real sport, actual sport that matters. They were seven points up at half-time and still managed to makes a balls of it!”

“It’s just what? A disaster? A disgrace? An act of such moral turpitude for which nothing less than a State-backed public inquiry will suffice in order to get to the nub of it? Yes, it’s all of these things. I agree. Send in the army. Send in the FCA. The Scouts. The Badgers. Send them all in. This needs sorting.”

“Yes, yes, it’s a stupid little game played by stupid little teams. I know that. Obviously I know that. It’s never been anything else. But this was different. This was a chance to do something different. A real thing for real people who are going through a tough time. It was going to mean more than just a game of football.”

“THEY WERE ON THE HANDY SIDE OF THE DRAW!”

“No, you’re right. I’m sorry. It’s just, I had forgotten what this feels like. Genuinely. It’s been so long. I had completely forgotten what it is to have your day ruined by the result of a match.”

“No, hear me out. This is real stuff. There’s millions of us. Billions, all over the planet. Men and women, boys and girls. All through the spring and summer, sport went away on us. Poof! Just disappeared. And yeah, fine, we missed the shots and the saves and all the nuts and bolts of watching it. But there’s more to it. We are lesser people without it. We are emotionally stunted.”

“No seriously. It’s only since the final whistle went that I properly realised how much I missed it. Especially now, when everyone’s lives are dominated by theories and projections and when even the smartest people on the planet are still only able to make educated guesses on where we’re all going. Sport feels like the only true thing in a world of spoof. You either do it or you don’t. It’s probably no bad thing to be reminded of what a visceral thing it is when your crowd don’t.”

“Ah look, I know, I should snap out of it. It’s not that simple though. Not for me, not for the rugby crowd on Saturday night, not for the hurling people all weekend, not for the Donegal women footballers, none of us.”

“What have the Donegal women got to do with anything?”

“Everything! Did you see the poxy goal Sinead Aherne scored for Dublin on Saturday? She went for a point, the ball hit the right-hand post high up, fell down to the ground and spun in under the Donegal crossbar. A total freak of a goal. Final score – 2-10 to 2-13. It decided the game! And that’s it for Donegal, championship more or less done. Like, how do you get over that?”

“There’s a kind of poetry in the struggle, is what I’m saying.”

“There is, though. It does us good to realise it every once in a while. Sport gives us that. The ups, the downs. The knots in the stomach. The flickering hope that something magical could happen. The idle rage at another year pissed away. Our lads weren’t good enough to go very far, I know that. But when I was roaring at the telly and not able to sit down for those last frees, I felt something very real. Something that had been missing for months and months, for so long that I could hardly remember it until it came back and got me. It felt terrible. But it felt good to feel it. So yes, they’re out. Does that answer your question?”

“No, not in the slightest.”

“Because I was asking about next door’s kids. Are they out in the garden? I want to get this scavenger hunt started before the storm gets here.”