Malachy Clerkin: Being up close to the live sporting action is more of a privilege than ever 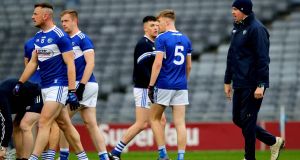 Michael Quirke: “I think it was definitely worth it. I do. I think the GAA did an incredible job to be honest with you.” Photograph: Ryan Byrne/Inpho

And just like that, the championship is half over. We’ve hardly had time to get a bit of wear out of the good winter coat and already the season is like an advent calendar with the doors torn down and the chocolate running low.

Six games to go in the football, five left in the hurling. Even though we went into it knowing it would shorten the winter, it has hurtled by at a relentless clip. To be a GAA hack in amongst it all is a stolen pleasure.

(Not that the gig is ever anything less than that, of course. Truly, it is a matter of humble and genuine honour to be considered among the chosen ones in the Irish Times sportswriting staff. And especially to be allowed time off on the weekends from shining up the laptops of the rugby lads so as to go and catch a game of hurling here and there. Another year of this and they’ve said they might even pass on Cummiskey’s mobile number. A lad can dream.)

A few weekends ago, I was on the way to a game when the sister rang. This was right at the start of Level 5, when the Gardaí had checkpoints on the motorways and the only people on the roads were truckers and delivery van drivers.

“Where are you going?” she said.

“What? What match? How are you allowed to go a match?” she asked, irritated now.

“Ach your shite it’s work,” she said. Which is Monaghan for, “Mam and Dad were nurses, FFS.”

And to be fair, she has a point. Even more so than usual, these past few weekends have felt at times like somebody has made a mistake somewhere along the way and at any moment there’s going to be a hand on the shoulder saying it’s time to go home.

It isn’t that the games have been amazing – this dispatch is coming from Croke Park in the wake of Dublin v Laois, which might just have been the least engaging sporting event in recorded history. But we’re allowed to go to matches when virtually nobody else can. It feels like a gift.

Some of it is surreal. It feels vaguely illegal to be able to park on Clonliffe Road and leave yourself a 70-yard walk to the front door.

The music choices at the water breaks are quite the lucky dip – a fortnight ago during Galway v Wexford, they amused themselves with Ghostbusters on Halloween night. Yesterday, it was Two Door Cinema Club. Next week it could be anything from Mick Flavin to Rolling Blackouts Coastal Fever for all we know.

In empty stadiums, everyone can hear you scream. Cathal Mannion took a hefty belt on Saturday night and you could hear the wind go out of him sitting up on the seventh floor. The roll-call of Dublin nicknames echoed through the place yesterday – Maccer, Fento, Deano, Bugsy and, eh, Ciarán.

Mostly, it falls to each team’s wider panel to supply the soundtrack. During the Kildare v Meath game yesterday, the roar that met each score (at least while it was close) would have led you to believe each panel carried about 100 members.

There are times, of course, when you wonder if it’s not all pointless. That wouldn’t be an unusual thought during a Dublin Leinster semi-final, granted. But if there’s one thing worse than seeing Dublin maul another Leinster no-hoper, it’s surely doing so with nobody in an 83,000-seater stadium.

But then you talk to the people involved and you realise these games do have meaning. Mike Quirke came to talk to us after yesterday’s trouncing and when we asked him had the whole thing been worth the hassle, he was unequivocal.

“Oh, I think it was definitely worth it. I do. I think the GAA did an incredible job to be honest with you. I got messages from all over the country about this game, about the game last week, about the roll-out of GAAGo and everybody being able to watch the game in their home. I thought it was fantastic.

“And I thought the adherence that intercounty squads had was phenomenal. We had no Covid case since we came back – that’s a huge credit to the players. Yeah, they’re coming to training but they’re also being incredibly disciplined when they’re away from training, when they’re in a social context.

And that’s the thing, in the end up. The journey goes on, in football, in hurling, in life. The football championship is down to seven teams, the hurling down to six, which means that for the vast majority of inter-county footballers and hurlers, this was a blink-and-you’ll-miss-it job. But look around you and there is meaning everywhere.

To be around it, to get to be up close to it when so, so many people cannot, that is a genuine privilege. Don’t imagine we don’t know it.